Even by D.C. standards, it's been a wretched summer of heat and humidity, derechos and power outages. And at some point, all that baggage has spilled over and made this entire region go collectively insane.

That's the only explanation we can come up with for, first, the endless debate over Stephen Strasburg being shut down, even though anyone paying attention knew this was coming months ago. And now, there's this, via Mr. Irrelevant. 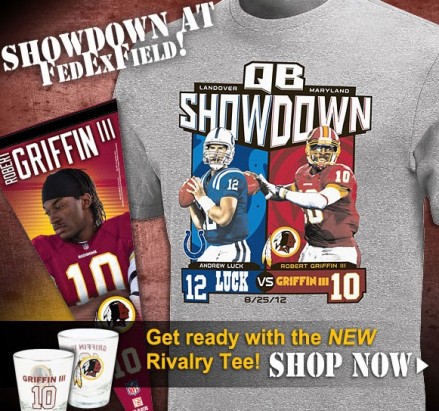 Get a good look at that, folks. That is a shirt hyping the third preseason game of the year, which takes place between the Redskins and the Indianapolis Colts a week from Saturday afternoon.

You see the important part? THIS IS A SHIRT HYPING THE THIRD PRESEASON GAME OF THE YEAR! However, we would just like to re-state Jamie Mottram's point that both the Redskins and Colts are selling these, making them equally culpable for this. We'll also just point out that for every Bird vs. Magic, there is a Dan vs. Dave.

It's like we always say: hyperbole is the greatest thing ever.