PHOTO: RGIII Does GQ, Because Obviously

Share All sharing options for: PHOTO: RGIII Does GQ, Because Obviously

We'll be the first to admit that we're not very fashion-forward here at SB Nation DC Towers. If you ask us who our favorite designer is, we'll likely give it some thought before coming out with Old Navy. Or Kohl's.

However, when you're a first-round NFL draft pick, the world is your oyster, and that includes the world of fashion as well.

So is it really any surprise that Robert Griffin III, the most charismatic quarterback in last April's draft class, would turn up in the pages of GQ porting a $6,000 military coat, $350 (not Mike) Prada jeans, and $130 boots? No, no it is not. 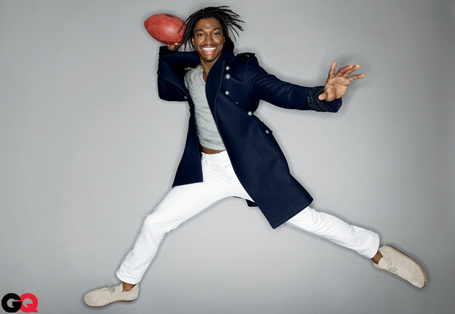 Now, is there any way we can get that military coat at a bit of a markdown? Chic is chic, after all.

Meanwhile, Redskins fans should just be glad RGIII didn't go the Tom Brady route and gotten animals involved. Then things would have been real ugly.