The Washington Redskins enter the 2012 season with Vegas putting the line of their total wins at 6.5. Now comes the fun part of trying to predict just how many they will win. The folks over at the Washington Redskins blog Hogs Haven have been looking at various computer models for the upcoming season. You can check out their findings after the jump.

Here is the table with the results of Predictalator. 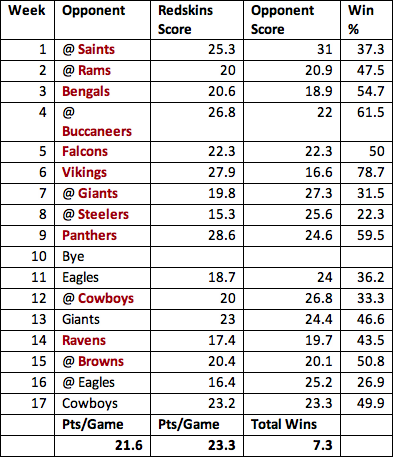 All in all, the computer that simulates every game for the season 50,000 times says that the Redskins will win seven games. The computer feels that Washington are very likely to have wins over the Bengals, Buccaneers, Vikings, Panthers and Browns. There are two toss-ups that they feel will go toward the Redskins, with their games against the Falcons and the Cowboys at home.

While many fans will want this prediction to be wrong, they may also cross their fingers that Predictalator gets their Super Bowl prediction of the Philadelphia Eagles defeating the New England Patriots wrong, too.