One of the bigger busts in recent Washington Redskins history, Devin Thomas, made a shocking announcement via Twitter Sunday afternoon, when he said that he is retiring from playing football at the age of just 25.

You can check out the tweets after the jump.

Here is what he said.

Many believed it to be a prank at first, until roughly a few hours later when he added: 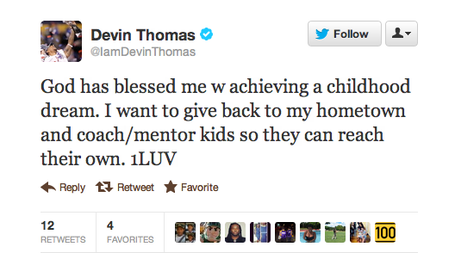 Thomas was selected by the Washington Redskins in the second round of the 2008 draft. He made only 43 receptions in his four NFL seasons, but he was a member of the 2011 Super Bowl champion New York Giants. He had signed with the Chicago Bears in the offseason, but as training camp began, he had a change of heart.

We wish Devin Thomas well with his future endeavors here at SB Nation DC, as you have to respect anyone that wants to give back to others so much.