We've been doing this (sportswriting, that is) full-time for almost exactly two years now, and we've received a lot of press credentials in that time. Each credential comes with a set of rules and guidelines for media members that can, for the most part, be paraphrased as follows: "No cheering in the press box, no autographs, and for God's sake put on some pants." You know, the usual stuff.

We haven't seen any message on press credentials quite like the ones on the credentials Maryland football's handing out at their preseason practices. Patrick Stevens of The Washington Times, who's seen more press credentials than we've had hot dinners, was good enough to tweet a picture of it. It's after the jump. 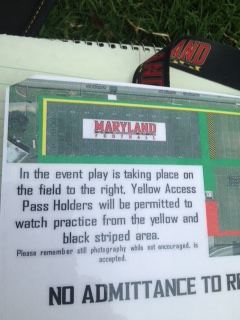 Catch the small print at the bottom?

"Please remember still photography, while not encouraged, is accepted."

That's so passive-aggressive, we're reasonably sure one of our ex-girlfriends wrote that. As Stevens himself put it:

@rich_campbell I'm not sure I could craft a sentence that would be easier to recognize as "written by a football coach" than that one.