Share All sharing options for: PHOTO: This Blown Call Cost The Nationals A Run Wednesday Night

Let's just get to this right now. Yes, the Dodgers got a run that they shouldn't have in the top of the fourth inning when Hanley Ramirez grounded into a fielder's choice play at third base. Ryan Zimmerman tagged out Adrian Gonzalez long before Matt Kemp crossed the plate.

The umpires huddled for a time before making a plainly incorrect call. The Dodgers should have been up 5-0 after the top of the fourth instead of being up 6-0. The photo below the jump makes it plain just how wrong the call was. 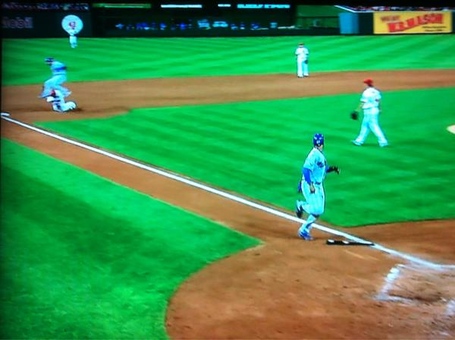 However, there is such a thing as the fallacy of the predetermined outcome. If the run is taken off the board, there's no guarantee that the game plays out in the exact way that it eventually did. Indeed, most of the negative stuff that affected the game (namely, John Lannan's poor start) had already taken place.

So blame the umpires for botching the call if you like, but blaming them for losing the game is rather a stretch.

Dodgers Vs. Nationals: They're In! Washington Clinches Postseason Berth With 4-1 Win