The Nats still have work to do to clinch the NL East title, but the swag is all ready to go.

The Washington Nationals begin a three-game series against the Philadelphia Phillies Tuesday at Citizens Bank Park. Washington currently holds a five-game lead over the Atlanta Braves in the NL East and their magic number (the combination of Washington wins and Atlanta losses it would take to secure the Eastern Division title) is five. If the Nationals sweep the Phillies and Atlanta gets swept by the Miami Marlins (unlikely, but just go with it here), this race could be over by Thursday.

And you know what that means ... it's T-Shirt time!

Bryan Scrafford (@bscrafford on Twitter) has come through with the goods. 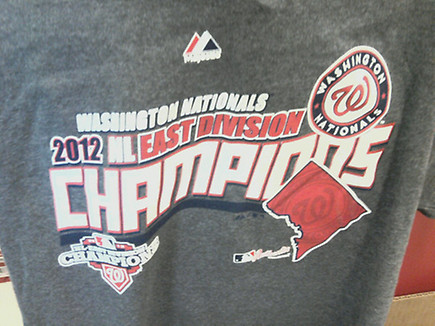 Note to MLB: gray looks good on T-shirts, not so much on hats.

Anyway, we dig this, and we particularly like the outline of the District that's so prominently represented (even though you know some Virginia or Maryland elected official will make some completely pointless complaint in 3 ... 2 ... 1). We just hope we haven't jinxed them by showing this.