Share All sharing options for: Photo: Baltimore/Washington gets own Sports Illustrated cover

So, here's the regional cover of this week's Sports Illustrated, which should be arriving in your mailbox Wednesday through Friday. 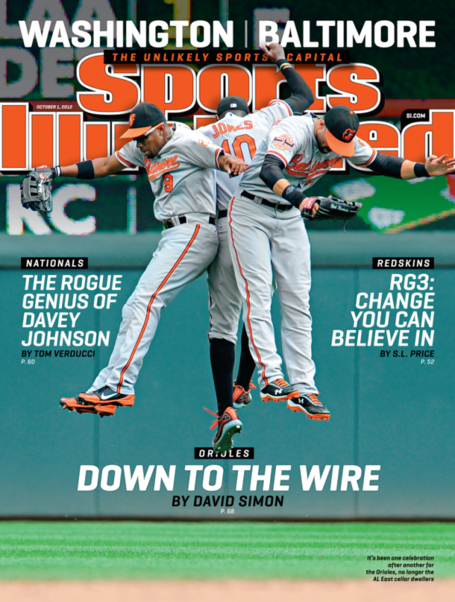 Oh, it's a murderer's row. There's David Simon on the Orioles, Tom Verducci (who one of our college professors once described as "too good for his own good," on Davey Johnson) and there is the inevitable RGIII feature.

The greater Washington sporting metroplex has always sort of fascinated us. Yes, many people in this area turned to the Orioles when there was no other baseball game in town (as a few Baltimoreans probably switched to the Redskins after the Colts departed) . And we've no doubt that quite a few people in Montgomery and Prince George's Counties have shifted allegiances to the Ravens during the Redskins' recent fallow run. Many people from Baltimore root for the Capitals and Wizards.

But it's hard to imagine two cities so historically different in temperament. Never mind the transience/non-transience of the populations. Permit us to quote, at length from Baltimore native Frank Deford's recently released autobiography, which is excellent.

Now, Deford's old magazine has brought the two together again.