Robin Ficker has hit the trifecta of the despised professions in his lifetime: lawyer, politician, and sports team heckler, most prominently with the then-Washington Bullets back when Abe Pollin was still alive and the team played in Prince George's County.

In recent months, Ficker's glommed on to the Washington Nationals, and like everyone else, he has an opinion of Stephen Strasburg's pending departure from the rotation (scheduled for Sept. 12). Here's how he expressed that opinion to Dan Steinberg.

"He knows his body - he's been in it longer than anyone. He knows how he feels. And I think he should make the decision, rather than have people outside his body make it for him."

Those "people outside his body" would, we're assuming, include medical doctors. You know, like the one who suggested that Strasburg's innings be capped in the first place.

Anyway, Ficker got 500 "Let Steve Decide" posters printed up and is handing them out in front of Nationals Park prior to Tuesday night's game with the Cubs, as this photo from @dcinwashington shows. 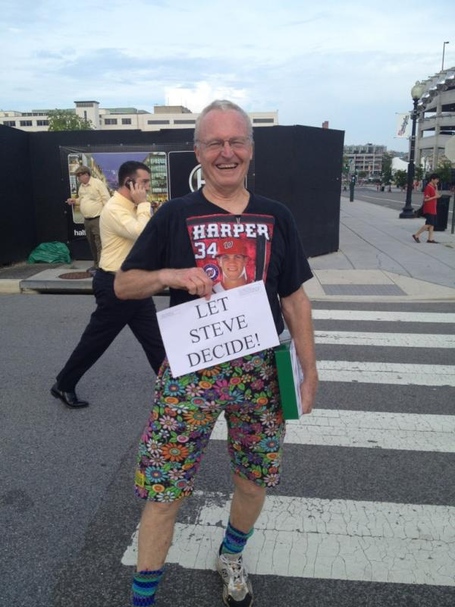 We'll just state right now that if you accept anything from a man wearing those shorts and those socks, you have nobody to blame but yourself.

Stephen Strasburg Shutdown: Pitcher 'Not Too Happy' About End Of His Season