Share All sharing options for: PHOTOS: Dawn Of RGIII Era Brings With It Great Human Signage

Sunday brings with it the dawn of the Robert Griffin III Era for the Washington Redskins. Despite the team traveling to New Orleans to kick off the 2012 NFL regular season, numerous Redskins fans can be found in and around town celebrating the beginning of the RGII Era. How do I know? Why, twitter of course. After the jump, check out some Washington fans eager for the season to begin.

Our first submission, via Rob Carlin of Comcast Sports Net:

The @rgiii fan club has made it to the Superdome.. #Redskins.. #RedskinsTalk twitter.com/RobCarlin/stat…

Not to be outdone, here are some Skins fans proposing a new candidate for President in 2012 (via @HomerMcFanboy): 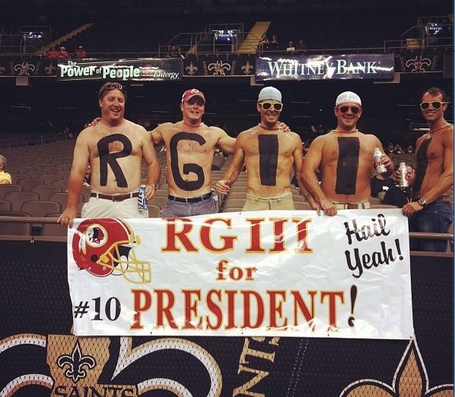 For more coverage of the Washington Redskins, visit Hogs Haven and SB Nation DC. For more on the Saints, check out Canal Street Chronicles. And, as always, visit SB Nation's NFL hub for any and all pro football news, commentary, and analysis.