Just how good is Nene?

Nene is having a great season and no one outside of D.C. seems to realize it.

Share All sharing options for: Just how good is Nene?

It'd be an understatement to say that the 2013 season hasn't been good to the Washington Wizards. Injuries, slumps, poor chemistry and an overall lack of talent have left Washington with the worst record in the NBA and not a lot of cause for optimism. It'd be one thing if one or two key players failed to progress, yet it appears that almost everyone on the team is worse than they were at this time last year.

One player who hasn't declined one iota is veteran center Nene.

The Brazilian big man has been shockingly good this year. He's played a key role on quite a few good Denver teams and has been individually productive enough that no one batted an eye when the Nuggets gave him a maximum contract in the winter of 2011, yet the 2012-13 NBA season could go down as the best of his career if he can get healthy enough to stay on the court and keep up this production in limited minutes.

Always more of an intangibles guy than the typical star player, Nene's raw production has nonetheless been incredible this year in limited minutes. He'd be an all-star if Washington was a .500 team and he was playing regular minutes

Nene is producing at least as well as the majority of last year's all-star forwards and centers, despite not having a secondary playmaker or shotmaker to draw defenses' attention. His ability to create good shots, set up teammates, defend and rebound would help any team in the NBA, but it's particularly valuable to a Washington team that would be utterly lost without him. Just how much better Nene has been than his teammates is jaw-dropping. 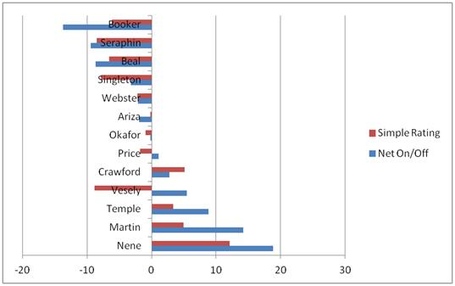 Data courtesy of 82games.com. 'Simple Ratings' are a production measure (a variant of John Hollinger's PER rating) for a player's own stats versus the counterpart player on the other team while he is on the court, as well as a simple on court/off court plus minus.

Washington has been 18.8 points per 48 minutes better when Nene has been on the court this year, far and away the best mark on the team and good enough for fourth in the entire NBA if he had met 82games' minutes threshold. With the exceptions of Bradley Beal, Kevin Seraphin and newcomer Garrett Temple, every player on the team when paired with Nene has been able to produce a positive scoring differential, something that becomes even more impressive when you consider that Washington's getting outscored by 13.1 points per 48 minutes when Nene's off the floor.

To fully grasp just how much better Nene makes the Wizards, it helps to have some context. When Nene sits, Washington has had the third worst scoring margin in the NBA during the shotclock era and would be lucky to win 10 games over a season. When he plays, though, Washington outscores their opponents by 5.7 points per 48 minutes, meaning that if Nene could magically play 48 minutes a game, Washington would have the scoring margin of the fifth best team in the league, smack dab between Memphis and New York, and would probably win 50 - 60 games over a full season.

The reason the team gets so much better isn't that complicated. Not only does Nene play very well as an individual on both ends of the court, he's also an excellent playmaker who allows Washington's bevy of spot up shooters and garbage bucket specialists play to their strengths. Someone like Martell Webster has a lot of value when he's spotting up in the corners and focusing his energy on playing good positional defense. When he's forced to create shots for himself or other players off the dribble? Not so much.

Two things could slow Nene down this year: his body and the soon-to-return John Wall. Nene's health problems are well-documented and he's always been injury-prone, something that's unlikely to change as he approaches the wrong side of 30. While his minutes have ticked up recently, he's also logged a lot of time against reserves, which inflates some of his on-off stats. Wall's return also will improve the Wizards as a team and take some of Nene's touches away, something that should make the divide between him and his teammates a little less striking and lower his career-high scoring and assist rates while raising his field goal percentage.