Last year, two rookie quarterbacks faced off in the playoffs for the first time in the Super Bowl era when the T.J. Yates-led Houston Texans took down Andy Dalton's Cincinnati Bengals. It didn't take another 46 years for two rookie quarterbacks to meet in the playoffs again. This Sunday, Russell Wilson leads his Seattle Seahawks into Landover, Maryland to take on Robert Griffin III's Washington Redskins in a matchup of two quarterbacks with different stories but similar instant success.

While Griffin carried high expectations well before the moment he was selected 2nd overall and paired with offensive guru Mike Shanahan, the tale of Russell Wilson is indeed very different. With pricey free agent signing Matt Flynn penciled in atop the Seahawks quarterback depth chart, the 24-year old Wilson was viewed more as an undersized-but -scrappy sort of backup who could push Flynn in camp and provide some upside potential if an injury to Flynn happened to thrust him into a starting role for a middling Seahawks team. Armed with extensive college experience and the proverbial chip on his shoulder, the third round selection from Wisconsin drew rave reviews throughout camp and preseason, ultimately stamping his seal on the starting job well before the season opener.

Wilson would finish the season having tied Peyton Manning for the most touchdown passes by a rookie (26), and breaking Ben Roethlisberger's rookie passer rating record by throwing up a cool 100.0 on the dot. Not to be outdone, Griffin surpassed both Roethlisberger and Wilson, setting a new rookie record for passer rating of 102.4.
Despite the massive successes of each rookie quarterback, Wilson's performance might not be the most unexpected for a rookie this season, while Griffin's might not even be the most impactful for his own team. Sixth round pick Alfred Morris proved to be a true workhorse back for the Redskins. Morris finished the season with 1,613 yards and 13 touchdowns, both good for second in the league. Playing for the NFC East crown in what could essentially be viewed as Washington's first playoff game, in the very last game of the regular season Morris delivered the finest performance of his rookie campaign against the rival Dallas Cowboys. Toting the rock 33 times, Morris rushed for a career-high 200 yards and three scores, leading the Redskins to 28-18 victory and a spot in the playoffs.

Of course, Seattle's Marshawn Lynch surprised nobody with his numbers, and is perennially one of the best backs in the NFL. This season, he finished third in the league with 1,590 rush yards. Given that Wilson and Griffin each threw the football 393 times, lowest among quarterbacks with a dozen or more starts, it is fairly likely that we will see each back carry upwards of 25 times in what should be a close game.

Seattle enters Friday as a three point road favorite; the tightest margin of any game this weekend and only one in which the visitor is favored. ‘Skins fans are certainly eager to witness a home "upset" against a team that actually recorded all five of its losses this season on the road: According to TiqIQ's secondary market data, Redskins Tickets are at an average of $308 per ticket to this game. While this has decreased over the course of the week, the number is still more than double the season average of $151.50. 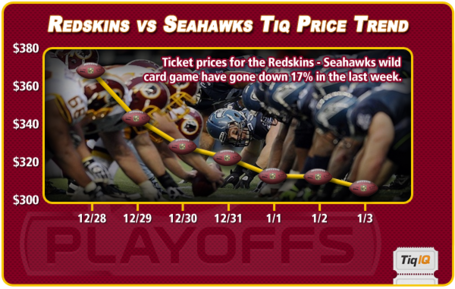 And remember, for all NFL playoffs tickets check out Ticketmaster, the official exchange for NFL tickets.