Charlie Davies will be returning to the city that almost ended his career over a year ago. Will D.C. United be the next step in his miraculous recovery?

The stands were bouncing and the emotion was high at RFK Stadium on Oct. 14, 2009, when seemingly every U.S. Soccer fan in attendance held up a printed No. 9 in the ninth minute in salute of Charlie Davies

Unfortunately, Davies wasn't there to see it. He was at a nearby hospital, recovering from injuries suffered in a tragic car accident on the George Washington Parkway just two days before. He didn't get to experience that huge showing of love and respect that day. But he'll be there on March 19. And he'll be wearing black-and-red.

D.C. United  finalized an agreement  with French club Sochaux to bring Davies to MLS for the 2011 season on a 12-month loan. At just 24 years old, Davies will join United through the MLS allocation process used for assigning returning U.S. National Team players to clubs in the league.

Its not just luck that will be bringing Davies to United though. And its not just because they finished with the worst record in the league last year either. As previously noted by SB Nation's D.C. United blog Black And Red United, the team adopted an innovative approach to the MLS allocation system wherein it specifically sought out Davies rather than just waiting for a National Team player to decide to return home to the U.S. Davies was targeted by Ben Olsen all along.

And Davies will be joining United with a specific goal in mind: to score. United finished the 2010 season with just 21 goals, setting a futile MLS record for lowest goals per game in a single season. United's two leading scorers - 17 year old rookie midfielder Andy Najar and disappointing Australian import Danny Allsopp - had only five goals apiece.

Even with Wolff and Ngwenya on board though, questions persisted about United's ability to score. No player on the roster seems capable of scoring 10 goals or more. No player, that is, except for Charlie Davies. 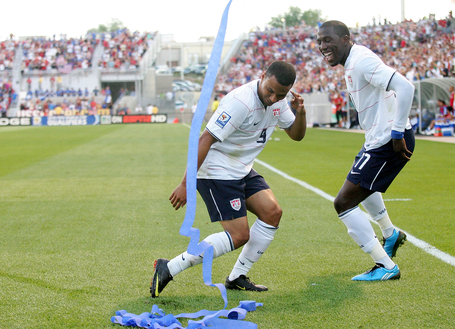 Davies joined United for a 10-day trial in Ft. Lauderdale last week as a test of his physical and mental capabilities. Despite the fact that he hasn't played in a competitive match in over a year, Davies has been lighting up the preseason for United , scoring three goals and two assists in two preseason matches. He passed his trial with flying colors, and will now be a member of United for the 2011 season.

The irony that he's getting a chance to prove himself again in the same city that nearly ended his career isn't lost on Davies. In a conference call last week , Davies spoke of how excited he is to play at RFK Stadium in D.C. where the fans have been so supportive since his accident. And it certainly helps that Davies doesn't remember any of the incident.

Davies has come a long way already since that fateful night in Oct. 2009. He's still got a ways to go before he can be considered an unquestioned starter for the U.S. National Team once again. He's made plenty of progress, and he's been given a great opportunity to show that he's not done yet. Will his progress continue? We'll soon find out.