I think it's safe to say Charlie Davies' return to soccer went well. Davies entered the game for D.C. United as a substitute early in the second half, and all he did was score two goals.

First, he banged home a penalty kick to put D.C. United up 2-1 on the Columbus Crew in the MLS season opener. Then, he broke ahead in the open field, made a nifty move to move past the goalie and deposited it in the back of the net to seal the game. When it was over, he did the Stanky Leg, which was absolutely appropriate.

Pretty much as good as it gets, right? If you ask Davies, it was as good as any day in his entire life.

Given everything he's been through since a near-fatal car accident in 2009, I think he's entitled to say something like that, even if it may not be true. 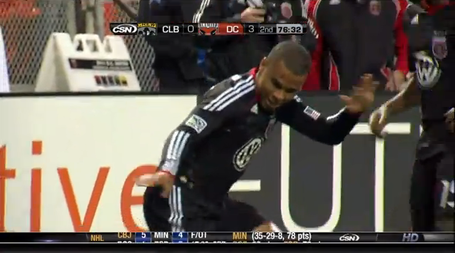