It was weird driving to RFK Stadium yesterday for the DC101 Chili Cookoff and not seeing the north end of Lot 8 lined with fans wearing black jerseys, food trucks, and the Barra Brava and Screaming Eagles tailgates. Once you got inside the stadium grounds though, D.C. United was very well represented.

United competed in the chili contest against 100 other contestants (they didn't win) and had a booth for fans to register for a ticket contest. Midfielder Clyde Simms was spotted mingling with the crowd (he told me he likes Seether), and went back stage along with his teammates Charlie Davies, Dax McCarty, and Chris Pontius to hang with Weezer before the headliner's set. Davies even made an appearance on stage with DC101 DJ (and avid soccer fan) Greg Roche. Most importantly though, Weezer's lead singer Rivers Cuomo wore a red United jersey on stage for the band's performance, and plugged the team's upcoming game against Dutch champion Ajax. 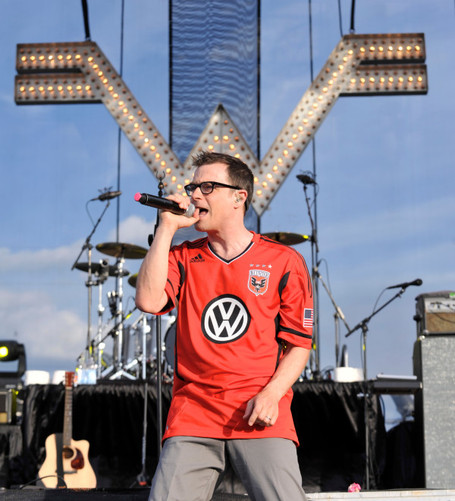 (Photo by D.C. United. For more pictures, go to dc101chilicookoff.com)

Cuomo told the crowd that he's thinking about trying out for the MLS next year, saying that he's done a few pushups and ran a few laps in preparation. If Chad Ochocinco can do it, why not Rivers Cuomo?