There are a lot of college pep bands in the D.C. area, but only one whose director is known by name--or nickname, rather.

Dr. Michael "Doc Nix" Nickens has been directing the George Mason pep band since the fall of 2006, and has become better known for the quality of his pinstriped suits than the quality of his pep band (even though those kids can play). The good doctor even made an appearance in CBS' "One Shining Moment" post-tournament montage at the end of last year's Big Dance (he's at the 40-second mark).

Nickens returned from a semester-long sabbatical to lead the band Wednesday night at George Mason's game against Duquesne. And boy, did he announce his presence in style. 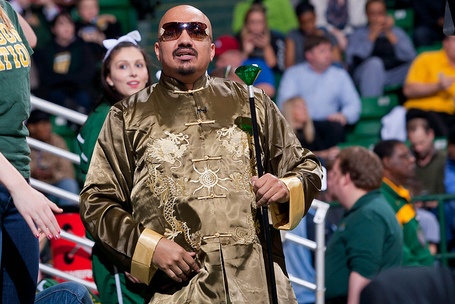 At the risk of going all Carl Spackler on you, the screen-printed Chinese-style robe, the grace, bald ... striking. For the record, Mason lost the game, 75-64.

Duquense Vs. George Mason: Patriots Lose To The Dukes, 75-64