So far, Villanova ihas used two of their big advantages to build this lead on the Patriots. First, is senior point guard Corey Fisher, who has made 4 of his first six shot attempts and has eleven points early for the Wildcats. The other is size. It is easy to see how much bigger Villanova is than Mason, and that size has produced an 8-6 rebounding advantage. Mason will have to find a way to neutralize 'Nova's size, or they could be in for along afternoon of one-and-done possessions and second chance points for Villanova.

Corey Stokes also hit three three-pointers in a row for the Wildcats.

As for Mason, they are shooting just 5-13 from the field, but they are managing to hang around. If they can do that, they will give themselves an opportunity to steal a win from a more talented Villanova team later in the game.

Mason star Cam Long took a hard spill, but appears to be fine. 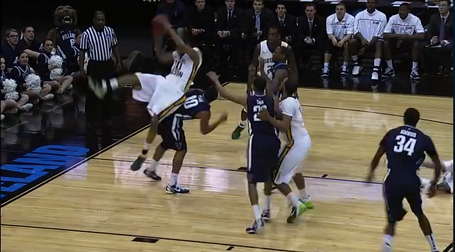 Make sure to check out or main 2011 NCAA Tournament stream for information on all the games, and check out our updated printable bracket which reflects yesterday's action.