George Mason Has Reason To Be Proud, Despite NCAA Tournament Loss

The 2011 George Mason team didn't recapture the NCAA Tournament magic that the 2006 squad did, but on the whole, it was a better team. It was just a victim of bad matchups and an injury at the worst possible time.

Share All sharing options for: George Mason Has Reason To Be Proud, Despite NCAA Tournament Loss

There's no question that March Madness is an unbelievable sporting event. It's great because so much is on the line in every single game, creating a tenor of excitement no other event can match. But there's an unfortunate downside, one that many teams are starting to realize now that they have been eliminated. The downside? At the end of the day, legacies are made based on tiny samples.

The downside to the NCAA Tournament applies perfectly to this year's George Mason team. The Patriots will forever be compared to the 2006 team that went to the Final Four, which is both unfair and understandable. The 2006 team made a historic NCAA Tournament run, while the 2011 team was the victim of an incredibly one-sided blowout loss to Ohio State before the second weekend. There's no question that the end of the season was more successful for the 2006 team than the 2011 team. 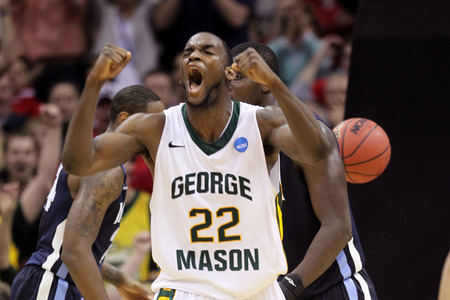 This becomes even more clear when you compare the two George Mason teams. The 2011 edition entered the NCAA Tournament with a better record (26-6 vs. 23-7). It fared better in a tougher CAA. It was a far better team offensively (114.5 points scored/100 possessions vs. 110). It rightfully earned a higher seed in the NCAA Tournament. By many measures, the 2011 team was better in a larger sample of games.

It was also a far better coaching job on the whole by Jim Larranaga. I realize this might be unpopular, because Larranaga's wizardry was a major thing analysts credited for the 2006 team's NCAA run, but let's think about this for a second. The 2006 team was built to win in 2006. The team's top three scorers -- Jai Lewis, Lamar Butler and Tony Skinn -- were all seniors. In Lewis and Will Thomas, Larranaga had the two post players he covets to match up with power conference teams and properly run his style. They weren't built to get to the Final Four, of course, but they arrived when they were supposed to arrive.

By contrast, the 2011 team was young and small on paper. Larranaga had just two seniors in the rotation -- all-world guard Cam Long, who compares very favorably to Butler, and backup Isaiah Tate. Every other key player is an underclassmen. Luke Hancock, the hero of the win over Villanova, is a sophomore. Ryan Pearson, the only guy who came to play against Ohio State, is a junior. Andre Cornelius and Mike Morrison, who had to grow up in a hurry in March, are both juniors. Vertrail Vaughns is a freshman. Etc. And with Morrison the only player in the rotation taller than 6'9'', Larranaga was forced to alter his post-oriented style, building the team instead around the point-forward ability of Hancock and the slashing ability of Long. Yet, despite all of that, the Patriots earned a higher seed, won 15 straight CAA games and took the regular-season CAA title, all things the 2006 team didn't do. They arrived a year earlier than expected.

To put it another way, the Patriots in 2006, on paper, better fit the classic "mid-major" template, and yet they still weren't as good on the whole as the 2011 team. 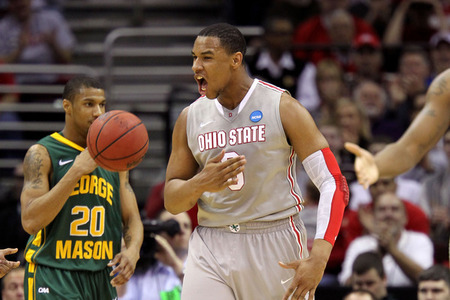 So why did the 2011 team have less NCAA Tournament success? Simple: they got unlucky. This isn't to take anything away from the 2006 team's magical run, but if you put that team in the position the 2011 team was in, there's no way they reach the Final Four.

The 2006 team beat some big-name programs, of course. Not only did they reach the Final Four, but they did so by beating Michigan State, North Carolina and Connecticut. But all of those teams had some chinks in their amour that the Patriots were well-equipped to exploit. The Spartans were inconsistent all year and were playing poorly entering the NCAA Tournament. The Tar Heels were unbelievably young after losing their entire 2006 title team. Connecticut was incredibly talented, but had already seen their focus nearly let them down in narrow wins over Albany, Kentucky and Washington earlier in the tournament. Larranaga himself admitted that all three teams were good matchups for his club.

Larranaga smiles. So much of the tournament is matchups. And Michigan State, North Carolina and Connecticut all played man-to-man defense with their centers and forwards standing between their opponents' centers and forwards. He got the right draws and those teams weren't able to adjust.

Contrast that to the 2011 team. The biggest weakness of this year's club was size, and a second-round date against the best big man in the country (Jared Sullinger) in its backyard (Cleveland) was pretty much the worst matchup imaginable. Throw in the loss of Hancock, the one player that makes the Patriots difficult to match up against, and Red Auerbach reincarnated couldn't coach that team to a win in that game. Even Villanova, with their size, was a tough matchup that was saved only because Hancock came through and the Wildcats choked.

But the finish shouldn't overshadow the incredible season this year's George Mason club put together. As good as the 2006 team was, and as amazing a run they had to get to the Final Four, the 2011 team, over a larger sample of games, was better, even if the ending was worse.

This is taking nothing away from the 2006 team, because that Final Four run was special. This is trying to keep everything in perspective after a disappointing NCAA Tournament loss. As Jim Larranaga deals with the disappointment of what happened Sunday, here's hoping he remembers just how much he and his team accomplished in 2011. 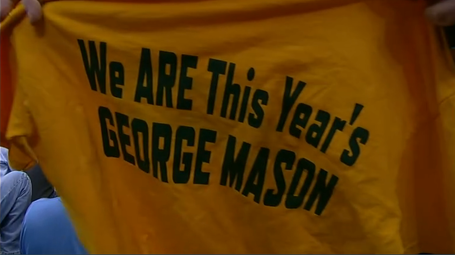