VIDEO: One Shining Moment For 2011 NCAA Tournament Had Many VCU Shots

Share All sharing options for: VIDEO: One Shining Moment For 2011 NCAA Tournament Had Many VCU Shots

Love it or hate it, Luther Vandross' "One Shining Moment" is a staple of the NCAA Tournament. After a year where Jennifer Hudson screwed up the tradition badly in 2010, Vandross returned for the 2011 edition and restored the song to normality. There are all the same dance shots and faces as before, but now with a familiar voice dubbed over the video.

Unsurprisingly, there were a lot of VCU shots in there. I counted eight VCU references, which seems about right considering the deep run the Rams made to the 2011 Final Four. There were also, somewhat surprisingly, a lot of Richmond shots in there too. Perhaps there was a need to commemorate Hoopstown USA beyond just VCU.

Besides that, obviously Butler and UConn dominated the video, despite the abomination of an NCAA championship game the two teams staged last night. There is also one reference to a local team in there, and I bet you can't guess who it was. Make the jump to find out!

UPDATE: So we're wrong - there were actually two references to the same local team. Correction after the jump. 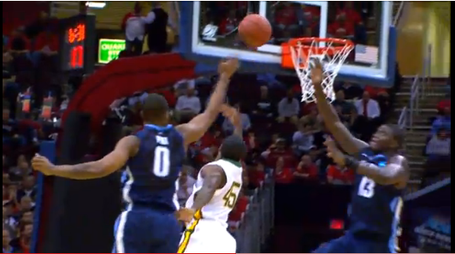 UPDATE: Whoops, our bad. On second watch, Doc Nix of the famous Green Machine pep band at George Mason, is also in there too. 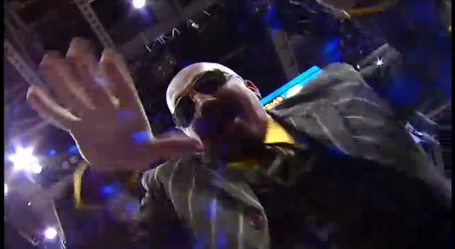