For four years, the Hoyas relied on Chris Wright and Chris Wright alone to be the emotional leader of the team. But as the end of this year showed, a team can't rely on just one person to spark them.

Share All sharing options for: Georgetown's Downfall Was Relying On Chris Wright Alone To Provide The Spark

When Chris Wright exploded in a fit of rage at the end of Georgetown's blowout loss to Virginia Commonwealth in the 2011 NCAA Tournament, it was a moment that symbolized an era in the program's history. The immediate reaction was to say that it was an uncharacteristic lack of composure on Wright's part, in a game where the senior-laden team as a whole exhibited a lack of composure.

That's part of the story. But if you really looked at the crunched-up face, the slanted eyebrows and the wide open mouth, you could tell it was more than a simple loss of composure in a game that hadn't gone the Hoyas' way. Instead, it was a wide variety of emotions that all came to a head on one missed call. It was all those hours of work to come back three weeks after a broken hand, all those demons of the disappointing NCAA Tournament losses to Davidson and Ohio. It was the end of an era, a 22-year old kid coming to terms with not being able to play high-level Division I basketball anymore.

But more fundamentally, it was a sign of the Hoyas' weakness over Wright's four-year career. They were more than the sum of their parts, but yet, they were also less than the sum of their parts. They could play basketball with a kind of rhythm many college teams never display, or they could all come crashing down in a crescendo of scattered noise. But the one player they needed right, both mentally and physically, was Wright. He was their leader, their fire, their personality and their soul, all in one.

Wright picked the Hoyas up so many times in his career. But the one time he needed them to pick him up, they failed. That, more than anything, exhibits what was wrong with the Hoyas in the last four years. 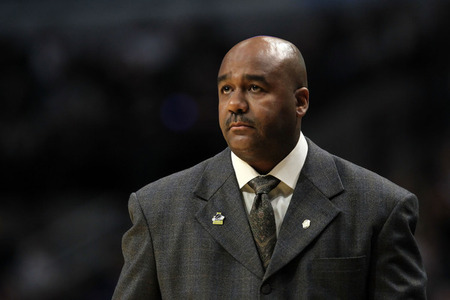 How do you explain the inconsistency the Hoyas have flashed for the past four years? Most can't, because it's strange.

By and large, Georgetown has been successful. Since 2007, the Hoyas won 67 percent of their regular-season games and 58 percent of their Big East games. They made the NCAA Tournament three out of the four years, and if Wright doesn't get hurt this year, they likely get top-four seeds all three times. They were a very good team.

They did it with a certain rhythm where everyone played their part. In a conference where teams have an identity, Georgetown had theirs. They never had a star player that dominated the ball and froze out his teammates. Greg Monroe, before he left, was the offensive initiator. Austin Freeman was the sharp-shooting guard. Wright was the guy who did his thing when everything broke down. Jason Clark provided shooting and athleticism. Julian Vaughn provided rebounding. On and on. Five players with defined roles, but ones that still played off each other.

When in harmony, it was beautiful to watch. Just ask Duke, who fell victim to the Hoyas buzzsaw last January. Sure, Duke had lost to Georgetown before, but not like this. Not while being completely outclassed. Or, just ask the eight teams that lost to Georgetown during a Big East winning streak.

But, of course, they also won just one NCAA Tournament game in that span. To make matters worse, the three losses all came to double-digit seeds, and the last two were embarrassing. Georgetown didn't just lose to Ohio and VCU; they were wiped off the floor against them like they didn't belong. One year after letting Ohio hit 13 threes on them, Georgetown let VCU hit 12. In both games, the Hoyas looked poorly-coached and undisciplined.

What explains the discrepancy? 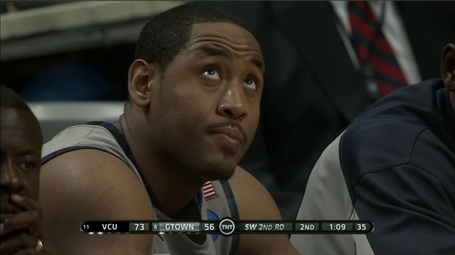 In its most inside-basketball terms, it all goes back to the blessing and curse of Georgetown. Throw all the parts together, and the machine keeps churning. Take away one part, though, and the whole thing breaks down. That's a very rough approximation of the Hoyas' system over the years.

But that doesn't explain the full story of recent Georgetown inconsistency. The Hoyas have lost key players before. The loss of Jeff Green in 2007 was a big deal; Georgetown still went 28-6 without him. The loss of Roy Hibbert stung; Greg Monroe filled the void. The loss of Monroe was damaging; the Hoyas were still heading to a top-four seed without him this year before the Wright injury.

Yet the injury to Wright was somehow more damaging than all of those, when it shouldn't have been. This isn't a knock on Wright, because he's a great player with a great attitude and a huge key to this team. Instead, it's a knock on how the Hoyas relied too heavily on Wright. No player, not even the very best, can lead vocally, perform with his play and inspire all by himself. He needs help.

And Wright, consistently, didn't get help in the leadership department. Freeman was the obvious candidate, but while he was a tremendous scorer that carried the Hoyas on many nights, he neglected the emotional leadership role far too often. (If you want to be mad at any one player for this loss, be mad at Freeman. He took himself out of the game). Vaughn may have led, but he wasn't producing. Clark was quiet like Freeman. Even Monroe, for the most part, was a fairly passive leader, all things considering.

All of those tasks fell to Wright, and you could see the end result without him in the lineup. Georgetown looked lost with their basketball skills, but more importantly, they looked rudderless. Instead of bearing down, they fell apart. They waited around for Wright to spark them, but Wright wasn't there to do it. Even Wright's return to the lineup didn't help, because he was too out of rhythm to do it.

It was time for Freeman, Clark, Vaughn and everyone else to assume the roles they previously neglected. Instead, they didn't, and Wright snapped because of it. It was as if the burden of sparking an entire roster of players had finally gotten to him. Wright may have cost his team a point, but at least he visibly cared. The rest of the Hoyas couldn't show that.

Ultimately, that is the unfortunate legacy of the outgoing senior class. When the going was good, the going was real good. But when the going was bad, all eyes turned to one man to drag them out of it. Unfortunately, this time, Chris Wright was too out of rhythm to do it. 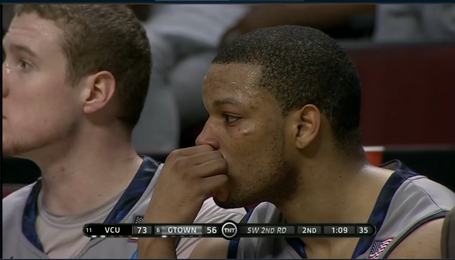