Via the Awl (yes, we do occasionally read non-sports sites from time-to-time, for our own sanity of nothing else), comes this fascinating little number, which is sure to raise all sorts of emotions depending on where you went to college and what you're doing now.

The Awl's NCAA School Tuition Tournament is a fantastically simple concept. Go down the bracket for the Round of 64 and compare each school's tuition head-to-head. Highest tuition moves on. As you might expect, this thing is slanted toward private and/or religious schools due to the Awl's use of in-state tuition wherever possible.

We'll spare you the nitty-gritty, but the Final Four is after the jump. 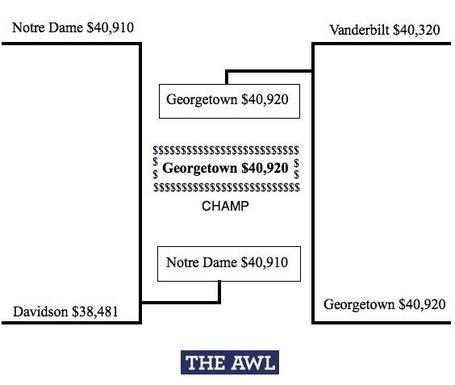 We'd feel a lot more superior about not having gone to any of these schools if we hadn't applied to two of them. Not to mention the fact that we wound up going to a Division III school whose tuition would challenge any of these.

Where does your school rank?