Florida State remains on top in SB Nation D.C.'s week 8 ACC football power rankings, but Tyrod Taylor and Virginia Tech are closing in on the 'Noles.

It was a scary day for the best ACC team, as they turned it over four times (three of them QB Christian Ponder interceptions), didn't have a 100-yard rusher and allowed BC's Montel Harris to go off for 191 yards. But a little trickery - Bert Reed scored the go-ahead TD on a WR reverse - and a defense that limited BC to just 91 passing yards and prevented a touchdown was good enough to get the win. They lost a bit of their death-grip on the top spot, but their résumé is just too good to drop.

Calling what Virginia Tech did to Wake Forest a "beatdown" would be an understatement. The Hokies turned out over 600 yards of total offense, including 292 yards and three touchdowns from quarterback Tyrod Taylor. The combination of a poor showing from FSU and Virginia Tech's dominating performance made me consider flipping No. 1 and No. 2, but the Hokies are still yet to beat a good team except N.C. State - and the Wolfpack just lost to ECU. Still, they've officially recovered, and the gap between the Hokies and Florida State is getting narrow.

I feel bad putting Miami here, because they still don't have that signature win that should place them here. But their only losses came against Ohio State and Florida State, and even though those aren't the powerhouses they seemed a week ago, they're still darn good teams. Plus, the talent provided by quarterback Jacory Harris and wide receiver Leonard Hankerson isn't going away anytime soon. The Canes' defense forced seven turnovers against Duke last week in a game that wasn't as close as the score. They'll get another shot at a semi-statement win this week against North Carolina.

The loss to East Carolina is a little better than it might look. The two are regional rivals that play close games, it was on the road, and N.C. State came back from 14-0 to get the game into overtime. Still, it was a loss to ECU and a loss that they deserved, and a supposed ACC title contender can't go doing that. The Wolfpack stay above in-state rival UNC by a hair thanks to their impressive wins earlier in the year, but now they need a few huge wins down the road to catch VT or FSU. If QB Russell Wilson keeps throwing three interceptions a game, they probably won't get them.

The Tar Heels picked up their first win in Charlottesville since 1981, and they looked mighty impressive in the process. It's "just UVA" to some extent, but quarterback T.J. Yates was outstanding, throwing 17 of 22 for 325 yards and three touchdowns. Throw in five forced turnovers, and the Heels don't have much to complain about at the end of the day. The loss to Georgia Tech in Week 3 is the only thing holding them back right now, but they're clearly a different team now that they've recovered from the scandal. If they get back all-ACC CB Kendrick Burney next week, they'll be a team to reckon with down the stretch.

What to do with the Yellow Jackets? The N.C. State loss looks a lot worse now that the 'Pack lost to ECU, and the loss at Kansas (perhaps the worst BCS team in the country) is now infamous. They handled UNC - regrettably, the team that's right above them in the rankings - when the Heels were reeling early in the year and beat up on two ACC bottom-feeders (UVA and Wake), plus the win last week over Middle Tennessee State. I'm skeptical of the Jackets, and will remain so until they get a win over a good ACC team (that didn't just get nailed with a suspension). They'll get their chance against Clemson next week.

I wasn't sold on Clemson being as bad as its 2-3 record last week, but even though it won on Saturday over Maryland, the Tigers didn't answer my questions. If not for a 10-point swing on special teams in the first half, Maryland enters the locker room at halftime with the lead and probably doesn't give up on the game in the second half. Defensive end Da'Quan Bowers should be a household name (in ACC households, at least) by the end of the season and leads the nation in sacks. But there are big problems on offense: quarterback Kyle Parker looked terrible last week (7 of 20, 105 yards) and heavier doses of running back Andre Ellington wasn't the cure as advertised. 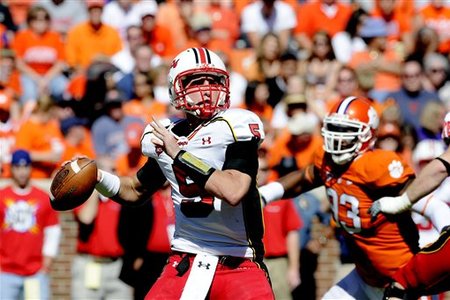 Want to know how big of a gap there is between the top seven ACC teams and the bottom five? The best of the bottom-feeders just lost to the worst of the top seven by 24. They certainly didn't play that poorly - in fact, quarterback Danny O'Brien was very impressive for one half and the Terps' defense limited Clemson's offense all day - but they seemingly gave up in the second half. If that becomes a trend, the rumors from last year of Ralph Friedgen losing control of the locker room will pop back up.

I'm taking a chance on this one, but the Eagles' finally solid play defensively and on the ground - star running back Montel Harris had 191 yards - against FSU, of all teams, might be the start of a long-due turnaround after a brutal early schedule. The Eagles still have the best linebacker in the conference in Luke Kuechly and Harris can be monstrous at times, as he showed on Saturday. True freshman quarterback Chase Rettig might not be the answer yet, but there's still hope for a bowl: four of BC's final six games come against the rest of the ACC's bottom five.

Did anyone really expect the hapless Deacs to put up a fight against the Hokies in Lane? Of course not. They still lack a consistent quarterback and the defense is terribly porous (FBS opponents are averaging nearly 42 points a game), so VT taking advantage of that was inevitable. But they're still the only member of the Bottom Four with an ACC win, and redshirt freshman running back Josh Harris is a future star - he leads the Deacs in rushing and ran for an unbelievable 241 yards on the Hokies' vaunted run defense. He's a small light at the end of a very long, very dark tunnel.

Before last week, UVA looked like they had a real chance to break out of the bottom four of the ACC. Sure, they still lacked an FBS win, but they played USC close and hadn't been embarrassed all year, even against FSU. And then UNC walks all over them, in Charlottesville no less. UVA's defense gave up nearly 500 yards and their offensive day consisted of little more than a 49-yard run by RB Keith Payne and QB Marc Verica throwing interceptions in UNC territory. At least next week's opponent, Eastern Michigan, is still winless.

Give the Dukies some credit: their past two losses have been a lot "better" than anyone expected. They only lost by five at Maryland and held Miami to a relatively mild 13-point victory. But when you're talking about a 13-point loss being pretty good, relatively speaking, things have gotten bad. Duke's offense relies on passing, and they didn't have it against the Canes: quarterback Sean Renfree threw five picks. Next up? Viriginia Tech in Blacksburg. Fun.

Next: at Virginia Tech, noon, ESPN3.com

Both teams had opportunities in the past to get statement wins, and both failed. UNC looks better than most people expected, while the Canes look worse than expectations. Either Miami can get their season back on the right track here or North Carolina can start making some serious noise in the ACC.