As a new college season begins, every local team is relying on players to take on new roles for them. Here's a look at the player from each local school who needs to step up their game the most to keep their team in the hunt.

Share All sharing options for: NCAA Basketball Preview: Players Who Could Make Or Break Each Local Team's Tournament Chances

The high level of turnover involved with college athletics makes it hard for any team to develop a sense of stability for more than a season at a time. Every team in the country has one player on who has nearly absolute sway on whether or not a team reaches its potential or chronically underachieves.

With a solid crop of talent leaving the college ranks in 2010, every team in the D.C. area has big questions to answer on who will step up and take on larger roles this season. By now, you should know who will be carrying the heaviest burdens, but these players will also need to come up big for their teams if they want to make noise in March. 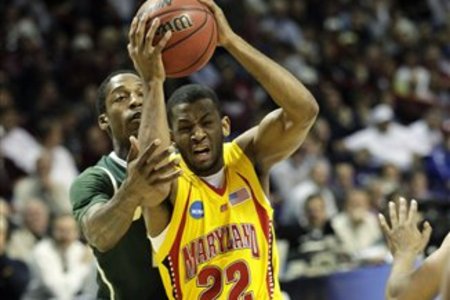 No one is expecting Bowie to fill Greivis Vasquez's shoes as a scoring threat -- that's Jordan Williams and Sean Mosley's job -- but he'll need to provide some stability at point guard if Maryland wants to make a run this season. The senior has had his ups and downs as a Terp, but if he can keep things steady for a young Maryland squad, he can leave on a high note.

Adrian Bowie, however, confirmed all the fears about him playing point guard. He played for only three minutes in the first half before racking up two fouls and sitting the rest of the half, but we saw plenty even in just those three minutes: three turnovers, a missed three-pointer, a couple of bad passes, and trouble handling the ball under pressure. Though his layups started to drop later, the same problems persisted into the second half. He finished with 7 turnovers and looked shaky in the half-court sets. He's a natural in transition, but he's not yet the answer for Maryland's point guard spot. Luckily for everyone involved, he has a lot of time to improve; we need to wait before making any type of decision regarding him, but his spot is officially in trouble.

Against College of Charleston, Bowie played far better and much closer to the level you should expect for the rest of the season. Pe'Shon Howard's performance in the closing minutes will garner the most attention, as it should, but Howard can't shield Bowie from his responsibilities forever. Come conference time, Gary Williams is going to need to be able to depend on Bowie to provide solid minutes in order to survive the ACC gauntlet. 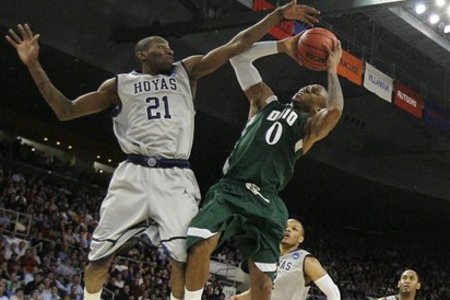 It's not always easy being the third option on a a talented team, but Jason Clark learned how to be effective in a support role behind Greg Monroe, Austin Freeman and Chris Wright last season, so moving up to being the team's third option should be a little more seamless. However that also means he'll be taking on more responsibilities this season, especially with the Hoyas' lack of depth in the frontcourt.

Though the comparison isn't perfect, and may be considered sacrilege by some, a good player for Clark to emulate this season would be Kyle Lowry. He had to do a little bit of everything to fill in the gaps for a guard-heavy team in order to keep Villanova from being a pushover defensively or strictly a jump-shooting team. When he was clicking, the Wildcats were nearly impossible to stop.

Last season, you could already see Clark have the same effect with the Hoyas. Georgetown finished 11-3 in games where Clark connected on at least half of his long-distance shots, including wins against Duke, Villanova and Pittsburgh. 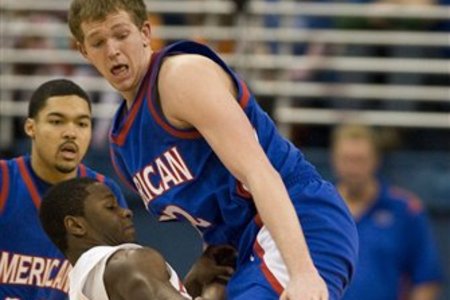 Last season, Lumpkins led the team in rebounding, but as coach Jeff Jones noted, his performance improved once Vlad Moldoveanu became eligible in mid-December. Moldoveanu's jumper opened up the floor for Lumpkins to be more effective inside as American improved this season.

Now, as they deal with the pressure of being the preseason favorite to win the Patriot League, Lumpkins has to do his part to make sure his relationship with Moldoveanu is symbiotic. If Lumpkins can keep teams honest, doing the grtty stuff in the paint, it takes pressure off Moldoveanu to have to do too much inside or on the defensive end. Plus, it makes American that much harder to defend when you have two big men who can put up points in different ways.

A talented big man is always a prize commodity on campus, but they're even more treasured at service academies because of the height restrictions that come with most military programs. At 6'11", Veazey is four inches taller than the next-tallest player on Navy's roster. The Midshipmen rely on him more than almost anyone else in the nation to play effectively in the paint and, most importantly, stay out of foul trouble.

He had a nice performance to start off the season against Texas, scoring 14 while adding eight rebounds and five blocks. He did foul out late, but by then, the Longhorns were already well on their way to an easy victory. If he can keep that up, Navy should be in good shape against more favorable opponents this season.

Morrison came to Fairfax in 2008 as little more than a guy who could deliver the pyrotechnics. He could throw down some nice dunks in transition and wake up sleepy crowds with impressive weakside blocks. Last season, he earned a starting spot as he added some more polish to his game. He was still a guy who did most of his damage within five feet of the rim, leading the team in blocked shots and finishing second in rebounds, but he made major strides last season to become a more complete player.

This season, the Patriots need him to continue his development to have any shot of keeping pace with Old Dominion in the CAA. Mason needs him to continue to reach his potential as a defensive menace and a compliment to frontcourt mate Ryan Pearson. He has the right skills to be a great fit, if he can fulfill that potential this season,

When I put together the list of the players who could be D.C.'s next big college hoops star, I identified Tony Taylor for the Colonials, because I believe he brings stability at point guard, which can go a long way in making one a contender. That said, the player on the Colonials who has the capability of making George Washington a threat in the A-10 is Kromah.

It's always a bit cliché to say a freshman had an up-and-down season, but he went through some pretty wild highs and lows last season:

On a team that's expected to make improvements this season, Kromah will play a big part in determining just how much better the Colonials get this season. If he can draw from the well of good performances more often this season, George Washington could be back in the thick of the conference standings faster than you can say Pops Mensah-Bonsu.

Experienced players are a new head coach's best friends. They provide a bridge between the coach and the rest of the roster while the new coach learns how to best use players he hasn't recruited. If Kevin Nickelberry wants to start his regime on the right foot, he has to make sure that he and Riley, Howard's only senior, are on the same page. As much as his performance on the court matters this season, his most important function will be serving as a barometer for how well the new coach's strategies are getting through to the rest of the team.