Greivis Vasquez Makes His Return To Washington D.C. For The First Time

Greivis Vasquez was one of the most beloved players in Maryland basketball history. Last night, he returned to Washington D.C. for the first time. He has moved on, but there is still a part of him that misses being here.

Share All sharing options for: Greivis Vasquez Makes His Return To Washington D.C. For The First Time

Greivis Vasquez walks into the visitor's locker room, a small area on one side of the Verizon Center where there's little room to maneuver. So far, he's gone through a fairly normal routine -- a TV interview with a Venezuelan station, a series of agility drills and a set of stretches, the latter two designed to address a tender right ankle that was scoped over the summer.

Now, Vasquez momentarily stands by his locker, then goes to the fruit plate, sitting on a small table in the middle of the room. He takes some grapes and a few pieces of melon and takes a step back to his locker. But then, the realization hits that Friday night is not a normal night for him. There is a box of tickets on the table next to the fruit plate, set aside for friends and family, and they beckon his name. So he stands up, grabs more fruit, and collects a handful of tickets he may need.

He repeats the routine one more time, grabbing another handful of tickets, eating even more fruit, then going back for more of both. Finally, he sits down next to his locker, and thumbs through all the tickets he's collected. I ask him how many tickets he has set aside for family and friends.

"No idea," he says, shaking his head.

For four years, Vasquez went through many ups and downs before finally becoming one of the most beloved players in Maryland basketball history. On Friday night, Vasquez's Memphis Grizzlies visited the Washington Wizards for the only time this season. In a couple hours, Vasquez will check in off the bench and be greeted by an audible cheer of friends, family and Maryland alumns or fans that did not travel with the current edition of the team to New York. But as Vasquez sits in his locker, tickets in hand, the realization hits him.

"I was here during my whole NBA Draft process, but since then, I haven't been back," he says. "This is actually my first time back." 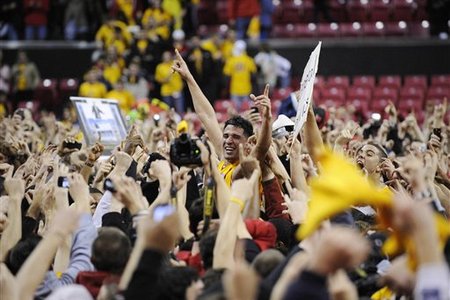 When this area last saw Greivis Vasquez, he was becoming the most beloved player at Maryland in more than half a decade. With his unflappable style and tremendous versatility, Vasquez overcame many of his demons and led the Terps to a surprise first-place finish in the ACC regular season. Vasquez was scrappy, he was full of confidence, and he had a swagger that made him so likeable. Once he put it all together in his senior season, he cemented himself in the annals of Maryland history.

Vasquez rode that momentum all the way to the NBA Draft. Few were sure he would ever be a first-round pick, but Wizards coach Flip Saunders, for one, was impressed. The Wizards worked out Vasquez, and Saunders admitted yesterday that he thought about taking him with one of their two late picks.

"Going into the lottery, we knew we had some high picks, but we knew we also had some picks in the middle of the draft. We were thinking of taking a point guard with that second pick, and he was a guy that could be very valuable for us," Saunders says.

Ultimately, the Wizards went in another direction, but there was Memphis, at pick No. 28, to swoop in. As has been the custom for Vasquez, when he goes somewhere, people follow. There were many families and friends of NBA Draft hopefuls in New York City that weekend, but few entourages were as loud as Vasquez's. The entire building knew that he was being picked as soon as the Venezuelas flags started flying in the air.

That moment was the beginning of a tumultuous summer for Vasquez on his road to the NBA. Thanks to the silliness of owner Michael Heisley, Vasquez played in the NBA Summer League without a contract. During that time, he hurt his ankle, an injury that required surgery. He was originally supposed to be sidelined for six weeks, but the injury lingered for longer and still affects him right now.

"It was really hard for me, because I didn't really play for five months," he says.

The summer turned into the fall, and eventually, into Grizzlies training camp. This is the time when rookies make their biggest impression on their head coaches. But for Vasquez, it was a time when he still was trying to get healthy. He ended up sitting out of all of training camp, preseason and the beginning of the regular season.

"You're behind while other guys are getting looks. I missed the whole training camp, and training camp is when an NBA team practices the most," he says. "Throughout the season, you don't practice as much because you have so many games. I missed the whole time, so coach [Lionel] Hollins can't take a look at me. I didn't play one preseason game either. So basically I'm just getting back to the court, and it's hard. But that's part of being a professional."

Vasquez eventually returned to the court seven games ago, and he's still trying to find his rhythm. He's shooting only 36 percent from the field, and admits that he's still "getting used to" playing on this level. But he's also earned the trust of Hollins and his teammates for his tenacity, and he's received most of the backup point guard minutes of late.

Vasquez is thrilled to be in his situation. He credits teammate Rudy Gay for being "a great mentor," says starting point guard Mike Conley and him are going to play well together "once we get used to each other" and had high praise for assistant coach Damon Stoudemire ("I can't say enough about him," Vasquez says). He's also earned the respect of his teammates.

"He may not be the most athletic dude, but he's relentless, he plays hard, and he will outhustle you," Conley said to Truth About It's Rashad Mobley. 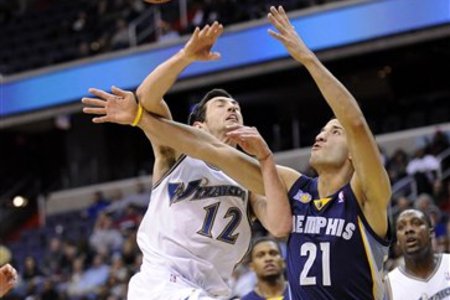 Vasquez's homecoming doesn't quite go as planned. He scores five points on six shots in 11 minutes, and is beat many times defensively by veteran Wizards guard Kirk Hinrich. The Grizzlies lose the game, and now, they must go and play the Miami Heat. But Vasquez still received plenty of support. Terps fans packed the Verizon Center and cheered every time Vasquez touched the ball, even though the current basketball team is playing in a high-profile tournament in New York.

"The team is playing in New York, so everybody in New York is watching them," Vasquez says before the game. "[But] I guess there are a lot of Maryland people coming to watch me play today, since it's my return to Maryland."

Vasquez says he misses Maryland a lot. I ask him what he thinks of this year's team's chances, and he says he "wouldn't be surprised" if they win the ACC. I can't resist the chance to needle him a little here, and I say to him, "What about Duke and Carolina?"

"I don't know if you went to school at Maryland, but I know what coach [Gary] Williams is capable of. I'm pretty sure no one picked us last year, and we still won it," he responds.

"That kind of stuff, when people doubt us, when he's like 'Maryland's not going to be good.' I miss that," he says later. "I think that motivated me, and that's something I need right now in the NBA. People criticizing me, so I can motivate myself. That's one thing I had at Maryland."

Vasquez still follows the current team from afar. He says he listened to the game against Pittbsurgh on Thursday night, and couldn't believe it when I tell him the Terps missed 16 free throws. He says he doesn't talk to the team much -- "I don't know if you know what the NBA life is like, but it's tough," he says -- but he does say that he gave some advice to one Terps player who has been struggling: point guard Adrian Bowie.

"I don't think he has to worry about nothing. He's got to keep playing," Vasquez says when asked about what he told Bowie. "I started scoring right when the ACC season started coming around, so he has plenty of time to play better. He just has to relax and let it come to him."

The best way to describe Vasquez's state of mind now is that he still misses that connection to D.C. He's adjusting to Memphis ("I'm a Tigers fan now," he jokes), but a part of him wishes he was back in Comcast Center, with all those screaming fans. He did his best to stay medium prior to last night's game, but he couldn't help himself.

"If I analyze my college career, I wouldn't trade any of my teammates for nothing. I miss that," he says.

He pauses for a second, then continues.

"I really, really miss that." 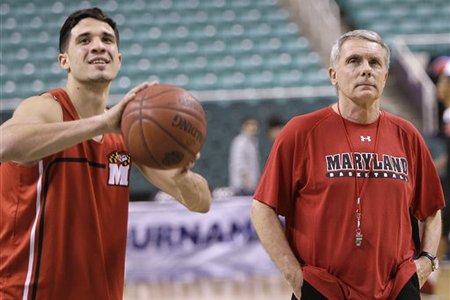