Share All sharing options for: Terrapins Salute The Troops With Camouflage Uniforms

If you were wondering why the Maryland Terrapins decided to cut all their football players and replace them with other students with such cool names as "Country" and "Service" we've got the answer.

Those aren't their actual names.

Maryland's football team has partnered with Under Armour in honoring the Wounded Warrior project by wearing newly designed uniforms that are black with camouflage accents, and by replacing the names on the backs of their uniforms with certain words related to the Armed Forces. 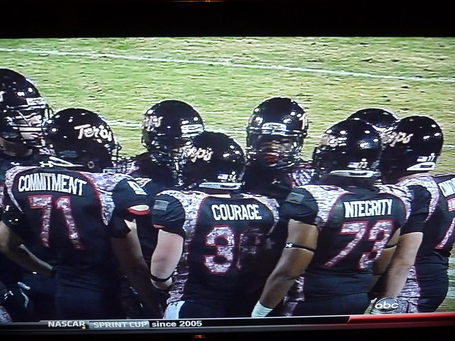 According to Inside Charm City, this has been in the works since October 10.

Under Armour (NSYE:UA) today announced its partnership with the Wounded Warrior Project, a not-for-profit organization that provides programs and services for injured service members and their families. The two have joined forces in conjunction with the University of South Carolina and University of Maryland football teams to recognize the sacrifices made by those who have served and those that continue to serve in our nation’s Armed Forces.