It's been so long since Gary Williams entered a college basketball season somewhere other than the head coach for Maryland. That was the awkward position the Terps' legend found himself in for the 2011 edition of Maryland Madness, but that didn't stop him from attending. Williams spoke to the media, then came out to roaring cheers at Comcast Center.

On his way out, Williams gave his customary fist pump, one he gave every time he took the floor from 1989-2010. It was a symbolic gesture and a fitting one. Of course, Mark Turgeon is the head coach now, and it remains to be seen whether he will enter the floor in as ridiculous a costume as Williams subjected himself to many times during his career.

A photo of Williams' conversation with the media is below the jump. It comes from the Terps' official Twitter feed. 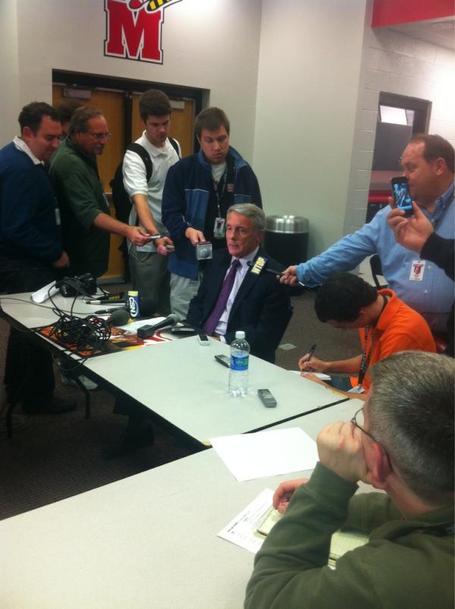 For more on all the local Midnight Madness festivities, visit this StoryStream. For more on the Terps, visit Testudo Times.