Maryland football's 21-16 loss to No. 13 Georgia Tech was marred by coach Randy Edsall pulling an ineffective Danny O'Brien from the game in favor of C.J. Brown. Brown had a 77-yard touchdown run and helped bring the Terps back into the game, but neither player was effective passing the ball.

Afterwards, Edsall said he would not make a final decision until he got to watch the two quarterbacks play on film. Via Patrick Stevens of the Washington Times: 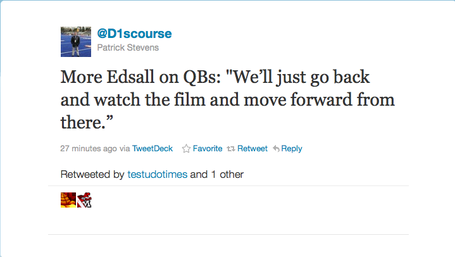 Neither player passed the ball effectively. O'Brien completed just one of six passes for 17 yards and an interception, while Brown was just four of 17 for 36 yards. Brown did have that 77-yard touchdown run, though, and the Terps in general moved the ball better with Brown in the game.

For more on the Terps, head on over to Testudo Times, and for a view from behind enemy lines, try SB Nation Atlanta and From the Rumble Seat.