Share All sharing options for: Randy Edsall Denies The Strangest NFL Rumor Ever

Football coaches don't normally get a promotion after polishing off a 2-10 season with a program that had a winning record the year before they arrived and had several key returning standouts. Nevertheless, there was a rumor floating around Twitter that the Jacksonville Jaguars would consider Maryland football coach Randy Edsall for their current coaching vacancy after firing Jack Del Rio on Tuesday. 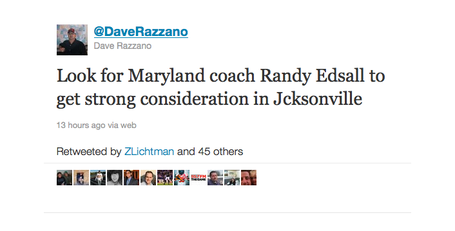 Edsall did work for Coughlin, but that was over a decade ago. Otherwise? I think we can all agree this rumor is bunk. Just to drive it home, Edsall himself said so to Jason Reid of the Washington Post:

"The only job that I am worried about, and the job that I have got all my heart and soul and attention on, is Maryland," Edsall told The Post’s Jason Reid on Tuesday. "We are going to do the things necessary to make sure that this program goes where we want it to go.

But hey, it was a fun rumor while it lasted, and it certainly freaked out Jaguars fans. So there's always that.