Virginia Vs. Maryland: A.J. Francis Sounds Off At Fans Who Chanted 'Fire Edsall'

Share All sharing options for: Virginia Vs. Maryland: A.J. Francis Sounds Off At Fans Who Chanted 'Fire Edsall'

As we noted to you all earlier, there were a number of fans at Saturday's Virginia-Maryland game that were chanting for Terps coach Randy Edsall to be fired. These fans were merely expressing frustration at an incredibly disappointing situation that has somehow continued to get worse over the course of the season. It was only a matter of time until someone involved with the team would express their frustration at the fans' frustration.

It also comes as little surprise that defensive tackle A.J. Francis turned out to be that person, given how frequently he uses social media.

The Terps' defensive tackle is perhaps the most prolific tweeter in the ACC. His feed is mostly filled with funny jokes and happy thoughts. On Saturday, it was instead filled with an angry rant following the game. 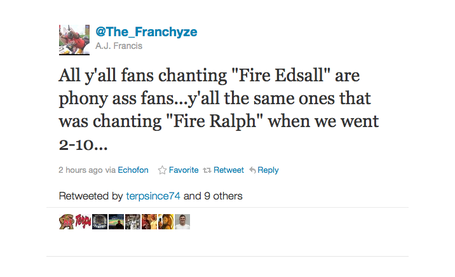 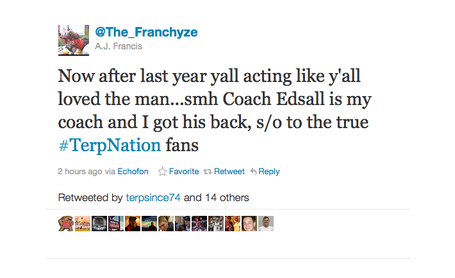 Blowing off steam happens, and the intent behind these tweets is understandable, but something tells me the Terps' defensive tackle will want to have these two tweets back when the frustration wears off in the coming hours and days.