If Maryland football coach Randy Edsall was looking for any relief from an angry fanbase, his latest quotes won't do him any favors. In a telephone conference with reporters on Sunday, Edsall discussed rebuilding the Terps' program and said firmly that he's been in this spot before. Fine, sure.

In the process, though, he made a pretty ridiculous comparison between Maryland and his former program in Connecticut. Via Patrick Stevens of the Washington Times.

"I've been through this before," Edsall said. "I know how to handle it. I know what to do. There is no panic. It was like this the first year when we put the team together in Jacksonville. ... It's Connecticut all over again, 13 years ago. Jacksonville Jaguars all over again. It's going to Boston College when we were there. I've been through all of this. This isn't earth-shattering. It doesn't have me discouraged. I have a vision of what we're going to do and I know we're doing things the right way."

Because he's a reporter, Stevens diplomatically pointed out the differences in those situations. Stevens was being far too nice. Edsall is basically comparing Maryland to a bunch of expansion teams, even though Maryland went 9-4 last year, sends plenty of prospects to the NFL, has the Under Armour connection and was returning several key starters.

Ben Broman of Testudo Times is pretty angry, pointing to a number of other PR blunders Edsall has made this season.

This is just the latest in a series of Edsall media blunders. Any one of those on their own might be considered merely skeptical, but throw them all together and it's a rather damning portrayal of Edsall's incompetence at handling media pressures. And now we know why our Connecticuter friends referred to him as "a public relations disaster." 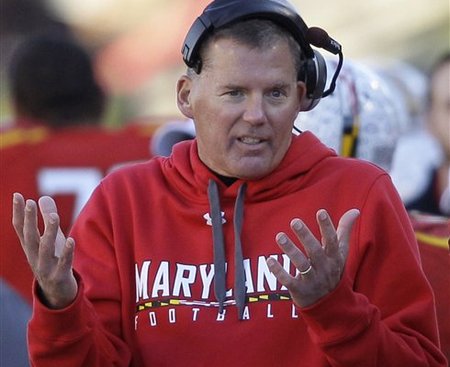