Maryland Basketball Fans Failing To Live Up To Lofty Reputation

Share All sharing options for: Maryland Basketball Fans Failing To Live Up To Lofty Reputation

I like to start every post I write about Maryland athletics with full disclosure: I went to the university and considered myself an avid fan while I was there. So much so in fact, that I was used as part of the university's marketing campaign (check after the jump). I take any criticism of their fan base personally even as an alumni. But I don't really have any way to explain what happened at the Comcast Center last night, where it appeared that at least half of the student section was empty.

Scott Van Pelt, perhaps Maryland's most famous basketball fan, was equally disappointed in the turnout, according to the D.C. Sports Bog.

Attention Maryland students....where the hell are you? No excuse for this crowd tonight. Pitiful display.

And he wasn't the only one who was perturbed at the turnout.

Gary Williams also took a shot at the Terps fans.

"Great game for those who showed up tonight," he said, via Terrapin Trail.

Ouch. Two harsh shots from people who have a pretty good amount of clout in the Maryland community. I can't disagree. The Terps likely won't make the NCAA Tournament this year, but at the same time, they are still a competitive team in the ACC, and are playing hard down the stretch. Even if the team isn't as good as it has been, it is still a high level of a basketball game that you get to go to for free. You can't possibly have anything better to do on a Wednesday in College Park.

And there is a certain pride element that comes into play here too. While i rooted my heart out for the team, I also knew that I was representing a tradition of raucous, if not borderline inappropriate, fans in Maryland history. The Terps won last night and played well, but there wasn't anyone there to see it. As a person who considers himself part of the fandom tradition, I'm disappointed to see that the current students don't have that sense of pride. But what do I know? I'm just the guy from this poster, which you can still see at the Verizon Center. 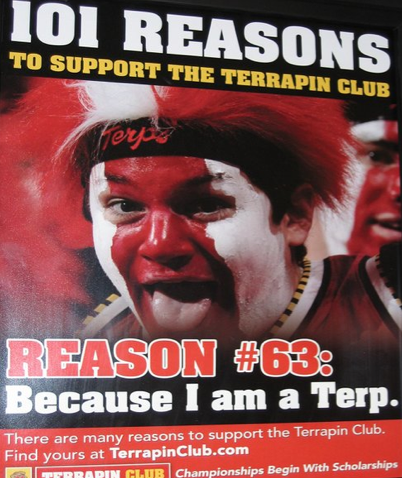