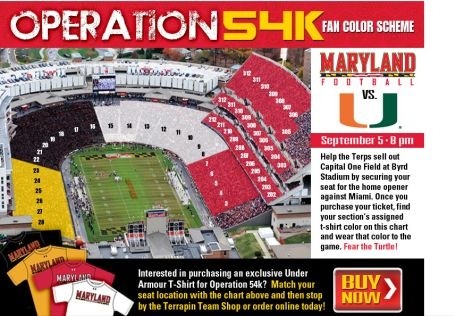 Maryland has been hyping up its football season opener against potentially-depleted Miami all summer, in something it has been dubbing "Operation 54k." That, of course, refers to the number of seats at Byrd Stadium.

Speaking of Byrd Stadium, as you can see on that flyer, Maryland is trying to do some sort of four-colored arrangement that corresponds with the four colors on their new jersey. It's a concept Boise State pulled off last year, and when done well, it's pretty cool. Something tells me, though, that this won't be done well.

Why? A few reasons.