Late in the first half, Chism forced a fumble that lineman Joe Vellano returned 30 yards into the end zone for a key touchdown. After being called for a costly penalty late in the second half that allowed Miami to eventually take the lead, Chism made up for his earlier transgression in grand fashion. With 40 seconds left in the game, Chism intercepted Hurricanes quarterback Stephen Morris, and scampered 54 yards the other way for the touchdown and a Maryland victory.

The Chism and Vellano touchdowns made up for a Maryland offense that failed miserably in the red zone trip after trip Monday night. Six journeys inside the Miami 20 yard line yielded 16 measly Maryland points.

Of course, if Chism had just gotten down instead of going all the way, the game would have ended. This is a fact he realized once coach Randy Edsall told him. 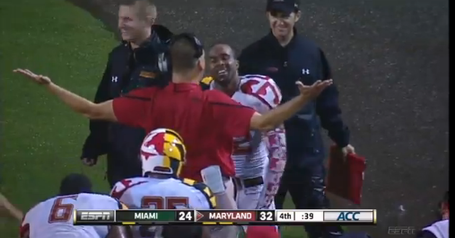