Share All sharing options for: Did Maryland Football Steal Helmet Design From A Roller Derby Team? 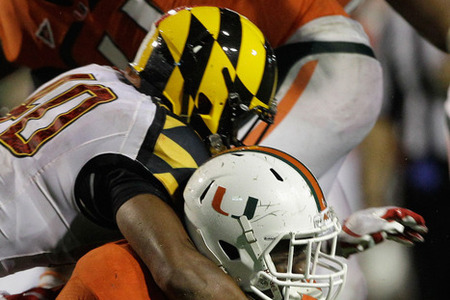 Just when you thought the helmets for the new Maryland football uniforms worn on Monday against Miami was an incredibly unique design, here comes a claim that it isn't. A number of members of the Charm City Roller Girls All-Star Team are mad because they feel Under Armour ripped off their helmet.

Via the Baltimore Sun:

"They're not identical, but they're shockingly similar," said Hillary "Rosie the Rioter" Rosensteel, the roller derby team's captain.

The link also has a picture of the two helmets side-by-side, where you can see that both have gold, black, red and white elements patterned after the Maryland state flag. Well, well well. Somewhat hilariously, an Under Armour spokesperson declined to comment because there is "high demand" for media access.

Ultimately, all of this is a little silly, because every design is a rip-off of some design somewhere else. At least now this roller derby team can get some media attention.