Share All sharing options for: Maryland Football Will Auction Off 10 State Flag Uniforms 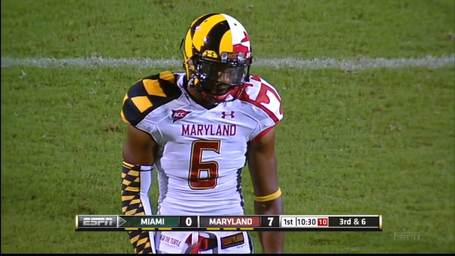 I know what you were thinking, Maryland football fans. As soon as you saw those taxi-colored state flag uniforms the football team wore on Monday night, you had to have one. Originally, you weren't going to be able to get one, but now, due to OVERWHELMING DEMAND, you can!

That's right, because the Maryland athletics department will auction off 10, count 'em TEN helmets and uniforms starting on Friday morning.

The bidding begins at $500 for the helmets and $200 for the jerseys themselves, so be prepared to pay up. Proceeds will go to the athletics department, which means you can personally help Maryland out of its money problems. Heck, if Maryland is smart, they put 100 uniforms up for auction. But why stop there? A thousand? Ten thousand? That budget shortfall will be gone in no time.

To bid on the 10 uniforms, click this link, which currently doesn't show the uniforms, but soon will. The bidding will end on Monday, September 19.