In its most basic sense, Mark Turgeon getting ejected from Maryland's 90-86 double-overtime loss to Miami was actually pretty helpful. When Turgeon was thrown out arguing a charging call on Nick Faust, the Terps were down by 11 points with just over seven and a half minutes remaining. The Terps eventually made a furious comeback to send the game into overtime, then double overtime before losing.

If you ask Turgeon, none of that was part of the plan. Via Jeff Barker of the Baltimore Sun:

"I wasn't trying to get kicked out. I apologize for that," Turgeon said. "Obviously, [it] woke our guys up. They played inspired." 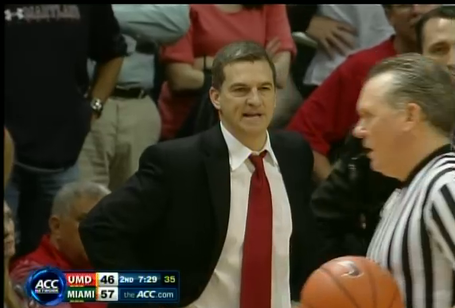 Ultimately, it worked in terms of getting the Terps back into the game. Problem is, it didn't stop the referees from blowing an obvious offensive basket interference at the beginning of the second overtime. Here's a still of the play, which clearly shows Shane Larkin touching the ball in the cylinder. 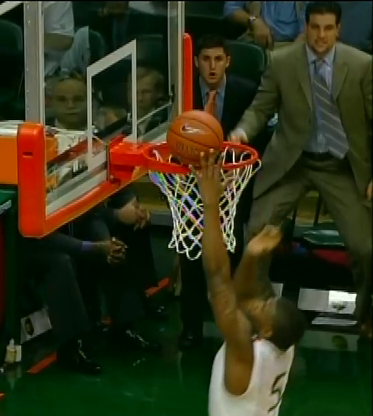 The Terps never led the rest of the way in the loss. If Turgeon hadn't been ejected in the second half, he may have ejected himself after that one.

Maryland Vs. Miami: Terps Rally, But Fall In Double Overtime In Wild Game