If we've learned nothing else over the first week of the NHL season, it's that these aren't the same old Washington Capitals.

Share All sharing options for: Washington Capitals Take On A New Personality

At first glance, the 2010-11 Washington Capitals appear to be awfully similar to previous incarnations. Sure, we're only three games into the season, but it's never too early to make a first impression.

We're less than a week into the regular season, but it's painfully obvious that some players still suffer mental lapses in the defensive zone. And yes, some players still take selfish penalties at the worst-possible time. Oh, and the Capitals can still play quality hockey for 20 minutes a night and beat most teams in the NHL.

Add in the highest-scoring offense in hockey and it would appear that, even though a handful of the names and faces have changed, the Caps are very much the same team that was unbeatable during the regular season and then fell asleep at the wheel in the playoffs.

I could understand if you watched the team's first three games and had a bad case of déjà vu (followed by profuse consumption of alcohol). But let me make one counterargument - even though many of the key pieces on this team are the same, the mindset in the locker room and on the ice is very different this time around. 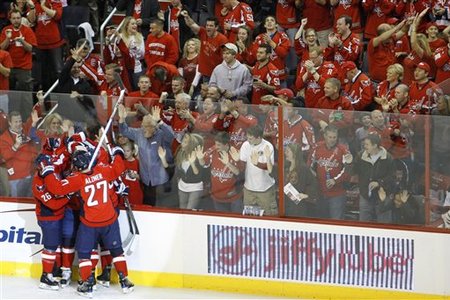 Take, for example, the home opener against the New Jersey Devils this past weekend.

The Capitals got off to a sluggish start (surprise, surprise), but woke up in the second period and eventually steamrolled the Devils in a 7-2 thumping. I don't care who you are or where you're playing hockey - whether it's a beer league or the NHL - it hurts feelings when you get waxed by an opponent.

People take that seriously, and if guys think an opponent is trying to show them up or run up the score, then tempers are going to flare. I can't speak on behalf of the Devils, but apparently Caps coach Bruce Boudreau is qualified to do so.

"They're frustrated because they're a proud team," he said after the game. "I don't know if they've been beaten like that for a while."

Once the Caps decided to show, they made up for lost time - scoring an even-strength goal, a shorthanded goal, a powerplay goal (for the first time since Ronald Reagan was in office) and a penalty shot.

After allowing four goals on eight shots in the second period, Devils goalie Martin Brodeur was pulled. Defenseman Anton Volchenkov left the game with a broken nose after taking the brunt of a Nicklas Backstrom slapshot. While those two players had little say in their nights ending early, the rest of the roster was left there to suffer until the very bitter end.

Eventually they had seen enough and Devils players apparently decided to show their displeasure by getting physical with Washington. And although Donald Brashear is long gone and newly acquired tough guy D.J. King was a healthy scratch, the Caps had no problem standing up for themselves and refusing to let anyone push them around. 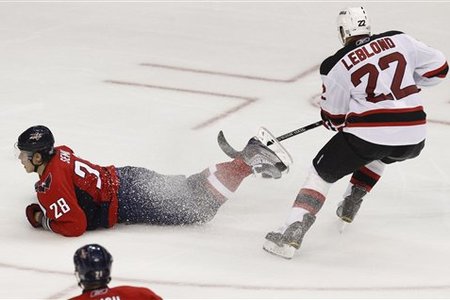 So Jason Chimera dropped the gloves. As did Matt Hendricks. Matt Bradley has always been willing to bleed on ... I mean fight when the time calls, so he too joined in the fun.

And here's the kicker - Mike Green got into a fight. Yes, that Mike Green. The guy who routinely leads all defensemen in points scored decided to throw down with Ilya Kovalchuk in the third period, and while it won't bring tears of joy to tough guys like Stephen Peat, Craig Berube and Chris Simon, it did serve a larger purpose.

It let the rest of the league know that the Capitals aren't going to stand there and get pushed around.

"I think we did make a statement that we're not the same team that we were last year," said forward Mike Knuble. "We've got some different personnel and we can still do it on the scoreboard, but when it gets physical, we're not going to get pushed around. It was good to see.

"I don't know if we had a game like this last year, but they can bring a team together faster than anything," he continued.

As strange as it may sound to some, Knuble suggested that the four fights the Caps were involved in against New Jersey mean more to a team trying to establish a new identity than the seven goals they scored that night.

"Yeah, it's a Saturday night and this game will get picked up," Knuble said. "Teams will see the highlights and I think it's a great statement we made by standing up for ourselves in the last five minutes of the game there."

If you're sitting there expecting Boudreau to chastise his players like a disappointed parent dealing with a kid who got in a fight at school ... well ... you're in for a letdown.

"We're the least fighting major team in the league and we didn't have D.J. King in the lineup," Boudreau said. "We accepted the challenges because we're a group that accepts challenges."

Alex Ovechkin has always been a player willing and able to stand up for himself. Guys like Chimera and Bradley will never be confused with NHL heavyweights, but both are also happy to throw down when the situation calls for it. But this game showed that those aren't the only players in town who are fed up. 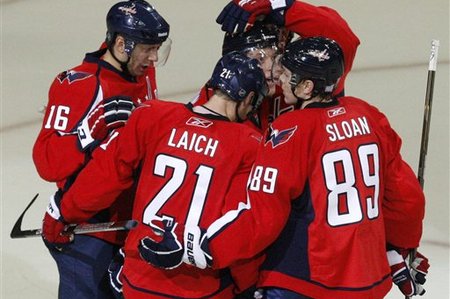 Like I said at the top, we're not even a week into the season yet. But as far as first impressions go, this was a very strong one. This isn't the same old Caps team. As the Devils left the Verizon Center defeated on the scoreboard and on the judge's scorecards, you can rest assured they learned the hard way.

They should just feel fortunate that King wasn't involved and pray like hell he's not in the lineup the next time these two teams square off.

As for the rest of the league, they'd be best to learn from another team's mistake. This is not a team you want to see motivated and focused. Try them if you must, but don't be surprised if things play out a little differently than they have in years past.