Six Players To Watch On The 2010 Washington Capitals

Unlike the Washington Redskins and Wizards, the Capitals actually value the draft. Because they put time, energy and resources into the evaluation process and actually attempt to acquire additional draft picks via trades, the proverbial cupboard is stocked with young talent. Here are a handful of young players who are ready to contribute.

Share All sharing options for: Six Players To Watch On The 2010 Washington Capitals

This weekend, the Washington Capitals will once again begin their quest for the franchise’s first-ever Stanley Cup victory.

And yes, the pain from last season’s stunning opening-round loss at the hands of eighth-seeded Montreal is still very fresh in the minds of many Caps fans. But trust me when I say the Capitals organization has moved on and is only looking forward.

The high-flying Capitals offense set record after record during the regular season, even capturing the first Presidents’ Trophy in franchise history, but couldn’t put the puck in the net in the playoffs. And somehow, for the third-consecutive season, the Capitals lost a Game 7 at home, in front of a sellout crowd at the Verizon Center.

Many front offices would have been tempted to retool the roster after witnessing such a disastrous collapse, but general manager George McPhee remained convinced that the pieces are already in place. Critics continue to say that the Caps need to upgrade at center, defense and goalie, but McPhee firmly believes a handful of youngsters from within are more than capable of stepping up and filling the void.

Casual fans already know the names of the "Young Guns" – Alex Ovechkin, Nicklas Backstrom, Alexander Semin and Mike Green. But, if McPhee is to be believed, the next wave of young talent is here to stay.

If the Capitals are going to get over the proverbial hump this season and make that elusive playoff run, then these six homegrown players are likely going to play a vital role. 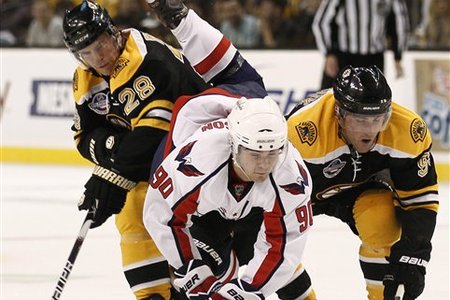 With the 24th pick in the 2009 NHL draft, the Capitals selected Marcus Johansson, a smooth-skating Swedish center. Although he’s barely old enough to shave (he turns 20 tomorrow), Washington believes they found a gem in Johansson. During the Caps Convention this past weekend, the always-candid Bruce Boudreau even compared Johansson to Backstrom, the team’s other Swedish center, who Boudreau said just might be the best all-around player in the entire NHL.

Johansson has speed, he’s smart and he’s defensive minded, which could earn him solid minutes on the penalty kill. A lot of 19-year-olds get their first glimpse of NHL action and wilt under the pressure, but Johansson has continued to play well and look the part so far this preseason.

Even if he’s not a mainstay on the roster this season, by all accounts he’s going to be around for a while once he does earn his way into the rotation. Backstrom is the top-line center for good reason, but there appears to be an opportunity for a youngster like Johansson to lock down the second- or third-line center role. 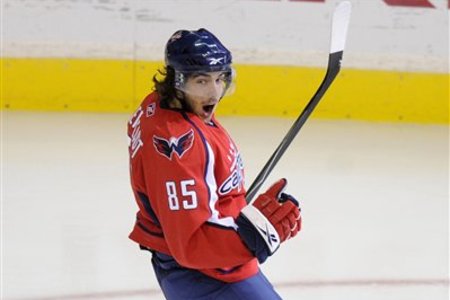 While Johansson came to Washington as a highly-regarded first-round pick, his main competition at center is a guy who had to face much stiffer odds. Perreault is also a Capitals draft pick, but his name wasn’t called until the sixth-round (177th overall) in the 2006 draft.

Over the last two seasons with the Hershey Bears, Perreault has registered 27 goals and 73 assists for 100 points in 133 regular-season games. In his limited time with the Capitals last season, Perreault picked up four goals and five assists for nine points in 21 games.

"He’s a really skilled forward and he’s really quick," said Hershey teammate Keith Aucoin of Perreault. "I haven’t seen a defense yet who is able to hold him off down low. He’s so quick and wiry, and he sees the ice as well as any player I’ve ever played with. He’s also a really solid passer. At times, he reminds me of me a little bit, back when I was younger. I may have lost a couple steps since then, but he reminds me a little bit of me back when I was younger. He’s a really great player though and he’s got a really bright future ahead of him."

Perreault will start the season in Hershey, but it’s a safe bet that he’ll see time in Washington again in the not-too-distant future. 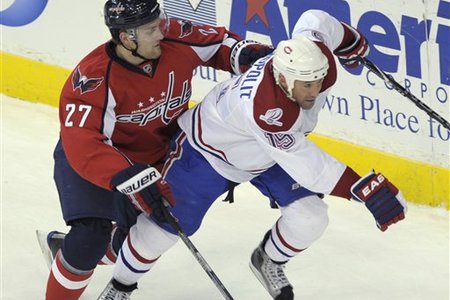 Many Caps fans, myself included, thought Alzner would be an 82-game player last season for Washington. He was the fifth overall pick in 2007 and he’s been considered one of the organization’s blue chip prospects ever since.

And yet, Boudreau went with limited players such as John Erskine and Tyler Sloan instead. Instead of pouting, Alzner just kept his head down and waited his turn. Now, he says he’s ready to handle the pressure of life in the NHL.

"I think I’m a more confident player out on the ice now," Alzner told me. "I’m not afraid to handle the puck for an extra second, if I have to. I’m not just looking to give it away and I’m not afraid to make an extra move to give myself more time and space to make a play, whereas before I’d always try to make the safest play. A good saying is ‘It’s not always the right play, but it’s never the wrong play,’ and that’s kind of how I was looking things. Now, I’m trying to jump up in the rush a little more and trying to play an all-around game." 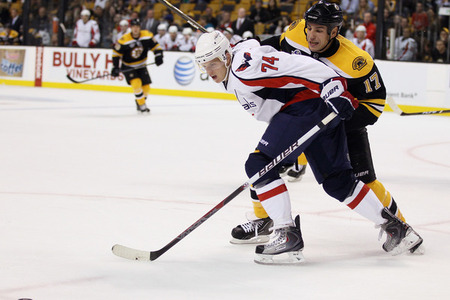 Call him Captain America. Call him the other half of "Carlzner." Call him whatever you’d like, as long as you get used to saying his name. Carlson came into our lives as the 27th overall pick in the 2008 draft and is already considered one of the best prospects in all of hockey.

At the 2010 World Junior Ice Hockey Championships, he scored the game-winning goal in overtime to bring home the gold medal for Team USA. Boudreau has said repeatedly that Alzner and Carlson were Washington’s two best players on the ice in Game 7 of last year’s playoffs.

This is where I point out that he’s only 20, so if he’s half as good as Caps fans think he is, he’ll be a fixture on the blueline for the next decade. That’s what happens when you actually put some time and effort into the draft (a concept Redskins and Wizards fans know nothing about). 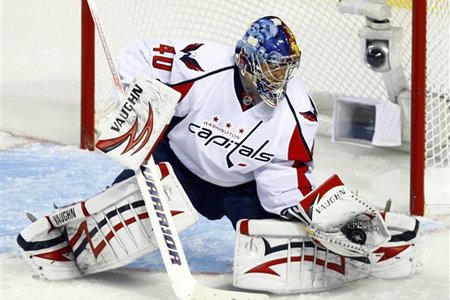 Out of everyone on this list, he’s probably the most well-known name to casual Caps fans. That’s because he was the primary backup to Jose Theodore last season – going 15-4-6, with a 2.55 goals against average and a .909 save percentage.

Varlamov is the epitome of a streaky goaltender. On the nights when he’s on his game, he’s impossible to beat. But if he gives up an early goal or gets rattled, Varlamov is just as likely to give up goals in waves.

The other issue with Varlamov is durability. Since he first arrived in D.C., he’s been in and out of the lineup because of various ailments – including groin and knee injuries. The former first rounder is seemingly always dealing with nagging injuries, which is another reason he’s yet to lock down the number-one goaltender spot.

But on pure skill alone, it’s impossible to count out Varlamov. If you’re the Caps and you’re banking on Varlamov, you just might want to make sure you’ve got a solid insurance policy and a backup plan – just in case. 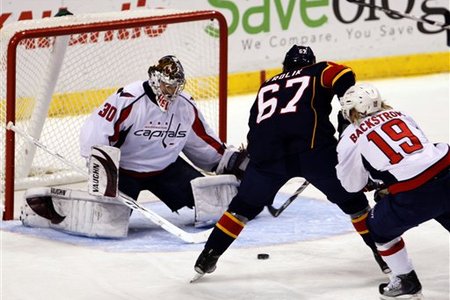 Here’s all you need to know about Neuvirth: he’s the first goalie in history to win back-to-back American Hockey League championships in his first two seasons. During that span he went 30-10 with a 1.98 goals against average and a .927 save percentage.

In his limited time in Washington, Neuvirth has an 11-5 record with a 2.80 goals against average and a .910 save percentage. He’s fundamentally sound and rarely ever caught out of position. While Varlamov is more of a high-risk, high-reward player, Neuvirth is much more solid and even keeled.

In related news, Boudreau essentially named Neuvirth the opening-night starter over the weekend at the Caps Convention. So you’ll get to see plenty of Neuvirth from the get go. And for my money, if he gets in there and plays as well as he has over the last two seasons, it’s Neuvirth’s job to lose.