A Look Back At The 2010 Capitals Convention

Saturday's 2nd annual Caps Convention was a smashing success. Owner Ted Leonsis continues to set the standard when it comes to providing a fan-friendly atmosphere and other professional franchises should take note.

Share All sharing options for: A Look Back At The 2010 Capitals Convention

There are very few professional sports franchises who ensure their fans are given a positive experience game in and game out. It's difficult to find an owner intent on providing fans with friendly service, a wholesome atmosphere, and quality game action. In a time of money-hungry businessmen and bureaucratic sport executives, the Washington Capitals stand out as a sports franchise intent on looking out for their supporters.

It's true. The Capitals and their owner Ted Leonsis have remained committed to making fans their top priority. Why else would he install beer holders next to the men's urinals? Why else would he sign Nicklas Backstrom to a 10-year contract extension this offseason? Leonsis knows customer service and a winning record is why fans come back to rock the red over and over again.

Fans respect Leonsis because he's more than a stuffed shirt up in a luxury box. They recognize he genuinely cares about their ideas and feedback, which in turn gets them more heavily involved with the team. The Capitals are one of the most blogged teams in the NHL, and many of those bloggers are granted access to the press box. 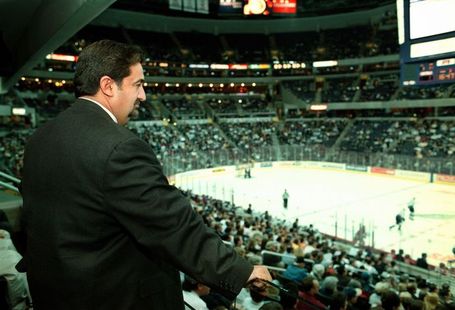 Leonsis understands the power of "new" media and has embraced it wholeheartedly. He blogs, he hosts online chats with fans, and is aware of how important it is to generate publicity in anyway possible for a team in a non-hockey market. All of his efforts to raise the Capitals' profile have been rewarded as Washington was ranked No. 11 in the ultimate team rankings by ESPN Magazine this summer (and No. 6 in 2009).

The Capitals have become one of the hottest tickets in the NHL thanks in part to Backstrom, flashy defenseman Mike Green, and Russian superstar Alex Ovechkin. But these players are as accessible off the ice as they are on it and that's why the Capitals are so beloved.

The entire team proved they are indeed the most fan-friendly bunch in sports when they showed up at the Walter Washington Convention Center this past Saturday for the second annual Caps Convention. The convention featured the current Capitals staff and team as well as legendary Caps alumni. Leonsis, general manager George McPhee, director of media relations Nate Ewell, and countless others all delivered a series of lectures concerning all things puck as fans were allowed to chime in with questions.

Ovechkin teamed up with Eric Fehr and Matt Bradley for a kids press conference where aspiring young journalists could grill their favorite players while Marcus Johansson and Mathieu Perreault stuck to their strengths and played some street hockey with a few youngsters (no reports on who won the game). Brooks Laich continued his winning ways with the ladies as Bruce Boudreau remembered to give props to Laich for his heroic assistance given to a Caps fan with a flat tire just hours after a devastating game seven loss to the Montreal Canadiens last year.

Boudreau told the crowd he was in front of the car in distress, but let Laich handle it since he didn't know how to change a flat (this story will undoubtedly be added in the updated version of Gabby's bio, Confessions of a Hockey Lifer). The Caps head man also introduced the team on the main stage where he had a few other funny moments. When left winger Jason Chimera's mug shot appeared on the big screen, Boudreau couldn't help himself. "I like Jason Chimera because he has less hair than me," he said with a smirk.

The Capitals also made sure the fans received a taste of hockey history. Former goaltender Olaf Kolzig and winger Peter Bondra talked about the Caps Stanley Cup run in 1998 and there were several display cases featuring memorabilia from past Capitals. Washington also had some Original Six exhibits as well as some other relics for all to see (including a fantastic Cristobal Huet mask from the Winter Classic in Wrigley). 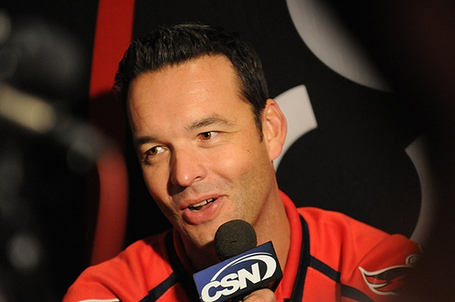 What better way to expose fans to hockey than to  get them up close and personal with its past? The Capitals wisely attempted to endear the game to their fans on Saturday and it will only help the spirit of hockey take further root in D.C.

However, the main event was the unveiling of the Winter Classic jerseys to be worn on January 1 against the Pittsburgh Peguins at Heinz Field. Ovechkin, Rod Langway, and Yvon Labre came on stage sporting the new duds and as expected, the Capitals kept it old-school with the throwback red, white, and blue uniforms. The only difference was the shorts were red instead of the original blue worn in the 70's.

Ovechkin described the uniforms as "sick" (seriously, what other word could he have used) to DC 101's Elliot Segal and the uniforms were received well by fans as was the entire day.

The Caps Convention is a phenomenal piece of brainstorming by Leonsis and his staff. Such a fan-friendly experience is a rarity in sports and it's refreshing to witness a team legitimately reaching out to their city and offering them an inside look at what makes a sports team tick. My hat is off to the Capitals for their continued diligence in serving a rabid fan base.