Alex Ovechkin Shaves In His Underwear

Share All sharing options for: Alex Ovechkin Shaves In His Underwear

In tonight's premier episode of HBO's 24/7 series on the Capitals and Penguins leading up to the 2011 NHL Winter Classic, Alex Ovechkin was shown shaving with his Gillette razor, and then facing the camera to put on his shirt. Problem is, he wasn't wearing any pants. 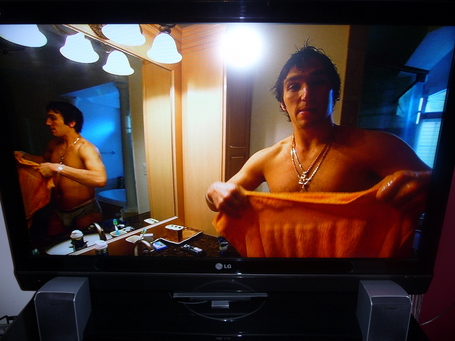 It was just one moment in the one-hour debut that seemed to depict the Capitals as the frustrated playboys who don't try hard enough. As opposed to the light-hearted fun-loving Penguins who barely need to try at all.

The episode featured a few speeches from Bruce Boudreau that would have driven the censors crazy. If HBO had any censors that is. Boudreau used the word f*** 15 times in one locker room speech following a goal in the final second of the second period of a game against the Florida Panthers. Boudreau's inspiration apparently didn't work, since the Capitals lost that game 3-0.

24/7 has made for great entertainment so far, and it will continue to do so, but none of it really matters until Jan. 1.