The Washington Capitals' win over the Ottawa Senators snapped a 17-game D.C. pro sports team losing streak. We take one last look back at a December of ineptitude for Washington D.C. professional sports teams.

On Dec. 3, 2010, the Washington Wizards defeated the Portland Trail Blazers 83-79 at the Verizon Center. Sixteen days later, on Dec. 19, 2010, the Washington Capitals rallied to defeat the Ottawa Senators 3-2 on the road. In between those two days, the three in-season Washington D.C. professional sports teams combined to lose 17 straight games. The Redskins fell three times in the span, the Capitals lost eight straight games and the Wizards added six consecutive losses.

So in honor of the Capitals finally snapping the infamous streak, we take a quick look back at those 17 losses that made Washington D.C. the most depressing sports city of the month.

December 4: Atlanta Thrashers 3, Washington Capitals 1: Ondrej Pavelic, the same goalie that collapsed on the ice in the season opener against the Capitals, was masterful, stopping 45 shots to give Atlanta a 3-1 win at the Verizon Center. Alex Ovechkin snapped what was previously the longest goalless streak of his career, but the Caps' offense was about to become stuck in neutral again.

December 5: New York Giants 31, Washington Redskins 7: The Redskins were never in this game and were completely outclassed by a Giants team missing their two best receivers. Albert Haynesworth was deactivated minutes before the game, in a move that ultimately led to his departure. Mike Shanahan said he was bad in practice, and therefore that's what caused him to miss the game. Haynesworth wasn't buying that.

"I was sick, so I did show up a minute late," Haynesworth said. "I don't think that's a reason to sit out."

Haynesworth then said much more, and was suspended. That was kind of a big deal.

December 5: Phoenix Suns 125, Washington Wizards 108: The Wizards hung around for one half, but Steve Nash was on fire, hitting all 10 of his field goal attempts to lead the Suns to the blowout win.

"I don't know what happened [in] the last 10 minutes," Ovechkin said. "It started with our line when Grabovski scored. . . . A 4-to-1 lead after two periods is pretty big. Losing a game like this is pretty bad for us."

December 7: Los Angeles Lakers 115, Washington Wizards 108: The Wizards went toe-to-toe in a thriller, but fell short in the end despite a furious comeback. The game featured plenty of highlights, including this incredible Nick Young 360 layup. After the game, Kobe Bryant called over John Wall and said this to him.

"I think he has a lot of talent and potential. I'm very hopeful when I see guys like that, that can carry the league for years to come. I just want guys like that to just continue to work and stay focused."

Since then, Wall has played in just one of the last five Wizards games.

December 8: Sacramento Kings 116, Washington Wizards 91: A shameful effort by the Wizards caused them to lose to the 4-15 Kings by 25. John Wall was pulled at the last minute, and the game was a disaster. It was also a perfect time for JaVale McGee to miss a free-throw line dunk in the closing seconds.

December 9: Florida Panthers 3, Washington Capitals 0: Entering the game, the Capitals were expected to snap their longest losing streak in the Bruce Boudreau era against a Panthers team that they had dominated. Instead, they were blown out 3-0, giving up a goal late in the second period and two more in the third. Craig Laughlin may or may not have cursed about one of those two third-period goals. Boudreau definitely cursed at the second period intermission of this game on HBO 24/7.

December 10: New York Knicks 101, Washington Wizards 95: The Wizards put up a good fight, but couldn't hold off the red-hot Knicks, who outlasted them late. By the end of the game, Knicks fans were chanting "M-V-P" whenever Amare Stoudemire went to the free-throw line.

December 11: Colorado Avalanche 3, Washington Capitals 2: Tomas Fleischmann returned to the Verizon Center, and his new team came away with a 3-2 win against Scott Hannan and the Capitals. Alexander Semin picked up a five-minute major for this crosscheck.

December 12: Tampa Bay Buccaneers 17, Washington Redskins 16: Ah yes, the Hunter Smith game. The Redskins blew plenty of opportunities, but none were bigger than what happened at the end of the game. Santana Moss scored to tie the game ... except the Redskins couldn't execute a routine extra point.

After the game, Smith implored everyone to blame him for not bringing the snap down.

"The ball's catchable; the kick is makeable; put this one on me. If anybody needs to take the blame, I'm willing to take it."

The Redskins complied and released him two days later, causing Smith to become philosophical about the Redskins as a losing organization.

December 12: New York Rangers 7, Washington Capitals 0: Not to be outdone, the tired and sick Capitals were absolutely obliterated by the Rangers in probably the lowest moment of this losing streak. An angry Alex Ovechkin fought a Rangers player in the third period to try to wake the team up, to no avail. Capitals assistant coach Dean Evanson was not thrilled with Ovechkin fighting.

December 15: Anaheim Ducks 2, Washington Capitals 1 (OT): The Caps put forth a great effort, but the Ducks rallied and scored early in overtime to hand the Capitals a heartbreaking defeat. Still, Japers Rink found some positives with the team's play.

On the scoreboard, the Washington Capitals are still mired in an ugly losing streak.  On the ice, however, they looked better than they have for at least a half dozen games, and if they'd had slightly better luck, they could very well have won this one handily (that may sound like an excuse, but it's true).  Nonetheless, the Caps were playing smarter, getting to the net more consistently, and forechecking with purpose and, for now, any fears that Bruce Boudreau had lost the room should be assuaged.

December 16: New Jersey Nets 97, Washington Wizards 89: In what ended up being Gilbert Arenas' final game in a Wizards uniform, Washington fell behind by 23 points early, somehow rallied to tie the game, and ended up losing in the end. Arenas had his moments in the fourth quarter, but committed a boneheaded technical foul with under two minutes left and an open-court foul with 30 seconds left that basically sealed the game for the Nets.

December 18: Boston Bruins 3, Washington Capitals 2: The Caps fell behind 3-0 early, and made a furious rally in the third period that came up short. Somehow, they outshot the Bruins 26-2 in the third period alone, but couldn't come away with the win. Says Boudreau:

"I really believed that we were going to tie it tonight," Boudreau said. "You could feel it. They were going, they were getting a break, but you know [Boston goaltender Tim] Thomas has beat an awful lot of teams with some great stuff and he did it with us."

December 18: Miami Heat 95, Washington Wizards 94: In the first game of the post-Gilbert Arenas era, the Wizards somehow were poised to win against the mighty Miami Heat. But then, they blew a four-point lead with 18 seconds left, turning it over in front of their own basket, taking the lead again, then losing it on two Dwyane Wade free throws and falling for good when Kirk Hinrich's mad dash to the basket resulted in an air ball and no foul call. Nick Young starred in Arenas' place after getting emotional about losing him, and JaVale McGee tried to do this for some reason.

December 19: Dallas Cowboys 33, Washington Redskins 30: Sexy Rexy Grossman made Mike Shanahan looked like the self-described genius he is, throwing for four touchdowns in a performance that Donovan McNabb never matched this season. Alas, the defense was awful, and the Cowboys got a field goal in the final two minutes to get the victory. McNabb, after being benched, was made a captain for some reason and seemed bored on the sidelines. 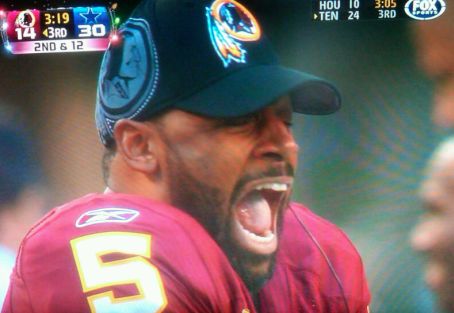