Washington Capitals Have Work To Do, But Make A Statement In Loss To Penguins

The Capitals didn't beat the Pittsburgh Penguins last night, but they managed to stand toe-to-toe with them despite playing Pittsburgh's style.

Share All sharing options for: Washington Capitals Have Work To Do, But Make A Statement In Loss To Penguins

There aren't many regular season games in the NHL which can match the intensity of the rivalry between the Washington Capitals and the Pittsburgh Penguins. The Caps, enduring the worst stretch of hockey they have played under Bruce Boudreau to date, could have been steamrolled by a red-hot Pens team led by the red-hot Captain Sidney Crosby, but that's not the way things work when two teams who hate each other hit the ice.

The Capitals were coming into the game with a mini two-game winning streak, but a disastrous performance against Pittsburgh would have send them floundering back into a state of comatose. The fragile psyche of this young team couldn't handle a crushing defeat. Fortunately, such a loss didn't occur, as the Caps poured on 34 shots and dictated play for much of the contest despite losing 3-2 in a shootout.

Although they wanted a win, Washington felt this game was a good measuring stick as to where they stood after weathering a miserable month of December. No, it wasn't a perfect performance, and in fact, there were some ugly moments, but overall the Caps proved to themselves they are serious Stanley Cup contenders. 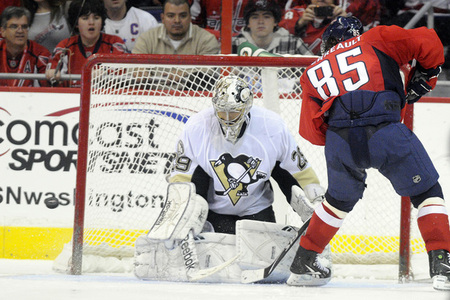 First the bad news. The offense certainly appears out of sync. The usual scoring suspects seem hesitant, the touch isn't there and overall goals have been hard to come by. You can call it bad luck or good goaltending from opposing teams, but the Capitals are snake-bit.

The five-on-three goal by Mike Green, which was a gimme' for last year's team, came as a relief to a unit unable to find the twine. Washington had two five-on-threes and a four-on-three in the game, but converted just once of six chances. The Penguins do have the number one penalty killing unit in the NHL, but the Capitals' power play woes go back further than tonight's contest.

Since December began, Washington has gone 6-48 with the man advantage and hasn't scored more than one power play goal in any game. Early in the year, they went through a similar stretch before hitting their stride, meaning they should snap out of the current slump. However, it is alarming when a team with this much skill can't score a man up.

The Caps are known for their raucous post-goal celebrations, but with the frustrating month they have had, there wasn't one after Green's goal in the second on Washington's 23rd shot of the game. Instead the defenseman let out a massive exhale and skated slowly away from the net. With one shot, his 14-game scoreless streak was over and he played well the rest of the evening.

"I thought it was his best game in a long time," Bruce Boudreau said following the loss. "He played good defensively and yet he jumped into the play and made things happen offensively. You could see his reaction when he scored it was like the weight of the world came off his shoulders and he looked like a different guy after that."

Green even had a chance to end the game in overtime with a move that appeared to leave Marc-Andre Fleury down and out. It was unclear if Green's shot went over the line as Fleury's glove hid the puck's location, but he certainly thought it crossed.

"100 percent I thought it was in," Green sighed. "I won't be able to sleep ... It's not the outcome we wanted but we played well tonight."

While Green finally exorcised whatever demons had been plaguing him, the same couldn't be said for Alex Ovechkin, Alexander Semin and Nicklas Backstrom. All three are undoubtedly elite players, but Ovechkin is going through one of the worst slumps in his career (two goals in his last 19 games), the enigmatic Semin has taken off on a midseason hiatus and Backstrom has been left with the offensively-challenged remnants of a once-dominant offense.

"The guys on the ice are skilled scorers but they're still human beings that are holding their sticks tight because they [haven't] had a lot of success offensively in a while," Boudreau said. 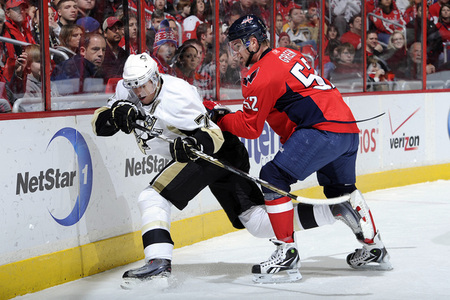 There's ups and downs to an 82-game season, and yet for some reason the Capitals haven't hit the low points much since 2007. This year is a different story, as Washington has undergone injuries, the flu and an unheard of eight game losing streak, which is still in the heads of their best players. Throw in the Winter Classic hype and the HBO cameras following every move, and it's been a tumultuous half-season. However, some adversity could be good for this team, and given that the Capitals already have 45 points on the season, a little more wouldn't be so bad either.

Boudreau's crew isn't blessed with a whole lot of mental toughness, and that's why a game like Thursday's was so important. It wasn't a dazzling display of goal scoring prowess, but that really isn't what the Capitals need at the moment. What they need is to have their patience tested and their concentration hardened. Can they stomach playing sound two-way hockey with a touch of grit?

With Fleury hot in net, that was the style they were forced to play against the Pens, and aside from a few lapses, they did so. They threw pucks in front, drew penalties by applying continual offensive pressure, and kept possession away from the dangerous Crosby and friends. Naturally it wasn't a flawless game, as Washington was badly outworked to start the third period, but they ultimately stood toe-to-toe against a club presently playing superior hockey and lost in what Boudreau described as a "skills competition."

"If they can play like that every night I'll be happy," he said at the podium. "You know they had passion. We played arguably right now---two losses in 20 games---the best team in the league and I thought we played them to a standstill."

Maybe the Capitals have learned their lesson and taken a new outlook on how to play the game in light of their tenacious performance Thursday night. A renewed attention to detail will only help this team in April, and if they do that, rest assured, the concerns over the lack of first-line scoring will melt away by March.