VIDEO: Did Mike Green's Shot In Overtime Go In?

Share All sharing options for: VIDEO: Did Mike Green's Shot In Overtime Go In?

The Capitals lost to the Penguins in a shootout last night, but some Capitals fans might argue that the game should have never gotten that far. Mike Green took a shot in overtime that was saved by Penguins goalkeeper Marc Andre Fleury made a pretty impressive glove save. Let's go to the video tape.

Here is the moment of truth: 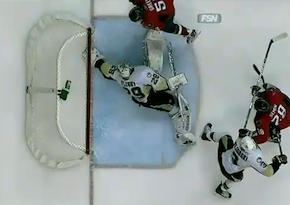 Looks pretty close to me. We'll break it down, and hear reaction from Green and Coach Boudreau after the jump.

The truth is, as much as we may want that goal to have gone in, and as much as it looks like Fluery's glove is across the line, there is no way to know where the puck is in Fleury's glove, and therefore it is an impossible call to make. Just liek you can't say for sure that it isn't a goal, you definitely can't say for sure that it is; and the NHL would catch a lot of flack if they allowed a game to end that way. Coach Boudreau seems to understand that;

"Save for the fact that you can't see through leather, you know we probably would have won the game"

I'm sure, that just like everyone else in the Caps' locker room, he understands that you can't call that a goal because you can't see through Fleury's glove. And it's much easier for the refs to say that it isn't a goal than to assume that it is. But that doesn't mean that Green can't be upset about it.

"100 percent I thought it was in," Green sighed. "I won't be able to sleep ... It's not the outcome we wanted but we played well tonight."

And he may be right. That puck could have very well crossed the line. But there's no way we can be sure, wo we'll just have to live with the result.