In preparation for the NHL Winter Classic this New Years Day, the Washington Capitals took to the Chevy Chase Club just north of D.C. today for an outdoor skating session.

As you can see from this photo of Alex Ovechkin below, as shared by Lindsay Applebaum of the Washington Post, the Capitals also used some eye black. Quite a bit of it actually. 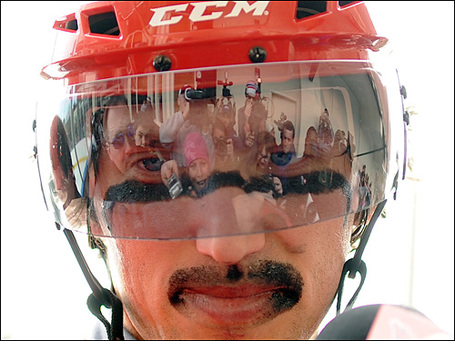 Apparently, Russians don't quite get the concept of eye black. I mean, they call it EYE black for a reason, right?

One could certainly write several different entertaining and possibly perverted captions for this photograph, but I think it would be best if we just let Ovechkin tell us about it for himself.

"Just to have fun, like laugh. Try to make a joke."

According to reports, today's practice was normal, other than the shining wind, shining sun, and lack of controlled air temperature. The Capitals performed their normal drills. And then they put some more stuff on their faces. According to Greg Schimmel of the Washington Post, Ovechkin wasn't the only one to do it.

Matt Hendricks and John Carlson wore thick triangles under both eyes, while Alex Ovechkin had a thick ring of eye black circling his mouth, and a thick, curved streak running under his eyes and across the bridge of his nose.