Ben Lovejoy Got Hit With A Puck, Can You Tell?

Share All sharing options for: Ben Lovejoy Got Hit With A Puck, Can You Tell?

They say that a Gordie Howe hat trick is a goal, an assist and a fight. Pittsburgh Penguins defenseman Ben Lovejoy was an assist away from earning that award, as told on the third episode HBO's 24/7 Capitals-Penguins Wednesday. So what then is a goal, a fight and a puck to the face? Is that a Ben Lovejoy hat trick?

Just one week after highlighting the bruised face of Matt Hendricks of the Capitals, HBO showed us not only a dental procedure on Mike Knuble, but also Lovejoy's swollen face. 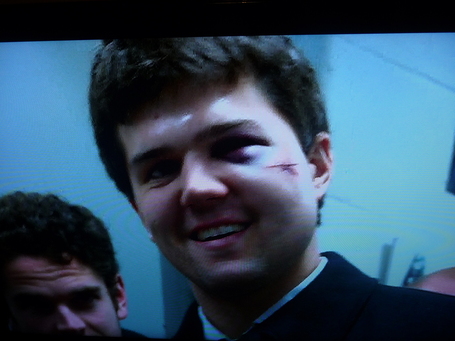 At least Lovejoy had a good sense of humor about the situation: "They said the pressure would make it grow. It did ... Can you tell I got hit?" If you need a tiebreaker between Lovejoy and Hendricks for worst (or best) hockey face, Mathieu Perreault's face after he broke his nose is a third candidate.

The 24/7 mini-series is exposing a pretty nasty side of hockey. We've seen more cuts, bruises, injuries and surgeries than spectacular goals. It's part of the reality of the sport. But that doesn't mean that HBO couldn't also show us a bit more of Eric Fehr's wife Rachel.