If you happened to miss the Capitals game last night and are thinking to yourself, "there's no way the refs would blow such an obvious call," I offer this visual evidence as proof to the contrary.

Check out that super slo-motion replay. Ovie is riding the defender's back, but that doesn't necessarily mean that that it was Ovie who interfered with the goalie. It is clearly the defender who falls into his own goalie. It's not Ovie's fault that the guy isn't strong enough to keep his balance when Ovie gets on him. This is a contact sport, right? 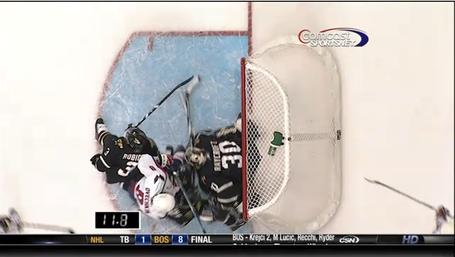 This doesn't look like too much of a push, just some contact that caused the defender to lose his balance. Ovechkin isn't even the one who makes the direct contact with the goalie. I didn't realize that officiating in the NHL was based on the transitive property. But what do I know? I'm not a professional hockey player. Let's see what they have to see, via On Frozen Blog.

Ovechkin for his part seemed just as incensed by the call out on the ice as his coach. He seemed in his animation far more perturbed than your typical athlete on the short end of a tough call. In the visitor’s locker room he reviewed the replay and kept his ire clipped and curt.

“I just saw the replay. No comment about it. It’s unbelievable.”

I agree with you, Ovie.

Capitals Vs. Stars: Potential Buzzer Beater Washed Out For Capitals As They Fall 2-1 To Stars