Washington D.C. Needs The Capitals To Get It In Order And Start Winning

Washington D.C. sports fans need the Washington Capitals to get it together and win. They need it now more than ever.

Share All sharing options for: Washington D.C. Needs The Capitals To Get It In Order And Start Winning

In light of the shellacking the Washington Capitals took on Wednesday night at the hands of the Tampa Bay Lightning, I thought I'd take a moment to state the obvious: this is an important season for the Caps. It's probably more important than even they might know.

Gone is the fervor surrounding the prospect of a town that could boast such names as Stephen Strasburg, Donovan McNabb, John Wall and Alexander Ovechkin. Strasburg is out for a year, Wall is constantly injured while surrounded by detritus and McNabb is in the process of being run out of town on a rail. It would have seemed impossible in a sports town like this, but we have hit an all time low in professional sports.

Except for the Washington Capitals. The lightning-fast superstars. The charismatic, fan friendly owner. The raucous fan base. The Caps have it all. Or, so it would seem. Lately, the Capitals have been led by guys named Chimera, Fehr and Gordon. Where in the name of Lord Stanley's cup are Backstrom, Green, Semin and Ovechkin?

One worry Capitals fans might have had at the beginning of this season would be the production of the young talent in the lineup. That ended up being one of the team's strengths this year. John Carlson and Karl Alzner have become the team's best defensive tandem. Marcus Johansson has been inconsistent but also mercurial and infinitely talented. Both young goal keepers have played remarkably, especially Semyon Varlamov, who not only is Trinity from the Matrix between the pipes, but is great at keeping Ovi out of trouble.

No, the problem with the Capitals is that the big guns are not firing and appear to be on cruise control. Maybe it doesn't matter. Maybe they can turn it on once the tournament starts. Maybe.

I know this though: I am one Washingtonian who needs that to happen and is not above begging higher powers for it to happen. The nation's capital is a dog town. Maryland football and its weird coaching search. Virginia Tech doing its yearly disappearing act in the postseason. The Nationals being shunned by every single pitcher who has ever toed the rubber. The Wizards trading away every familiar face in D.C. basketball. Rex Grossman. These are desperate times and the only glimmer of hope is remarkably inconsistent. My pal and colleague at 106.7 The Fan, Danny Rouhier, was mixing it up with The Fan's Redskins reporter Grant Paulsen on this very issue: 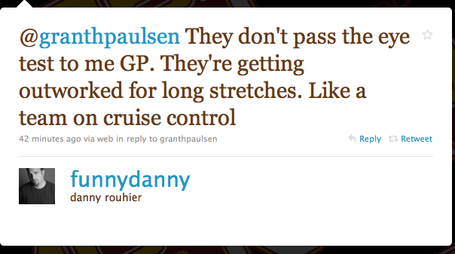 This notion that the team is good enough to disregard the regular season is preposterous. I want them using this time to gel and continue to assimilate the young talent. Make sure Scott Hannan is comfortable with his new digs. Let the offense catch up with the team's much improved defense & penalty kill. I don't think a team that was ousted in the opening round a year before by an eight seed has earned the luxury of "coasting."

Working on my radio show, people are always comparing the Capitals to the Redskins. Can this ever be a hockey town? Can the Caps compete with football in this city?  At this point, it doesn't matter. The Capitals are needed for a much higher calling right now.They need to compete for Washington D.C.

We are the new Philadelphia now that Philadelphia looks like the new Boston. We are a smart, savvy, rich, progressive town. Everyone comes from all over the world to live here. Just look at the price of homes in northern Virginia if you need proof of that. We need ONE of our teams to reflect how wonderful a place this is to live and be from. That means we need the hockey team to take the cruise control off and start stepping on the gas.