For Washington Capitals, No Need To Push The Panic Button

The Capitals are struggling compared to their success in the last two years, but there's no reason to panic. In fact, this may be the best thing to happen to them.

Share All sharing options for: For Washington Capitals, No Need To Push The Panic Button

With all the negativity surrounding the Washington Capitals, you would think they were buried deep in the standings, on the outside of the playoff picture looking in. But despite the lack of positive vibes emanating from Chinatown, the team sits comfortably at fifth place in the Eastern Conference, just three points behind Tampa Bay for the division lead. They also have the seventh-most points in the entire NHL and are still considered to be among the leading contenders for the Stanley Cup.

However, the Caps aren't getting the same rave reviews, largely because of a decrease in offensive performance, which has eclipsed the fact that they have achieved a balance in their game. An eight-game losing streak in December, magnified in an HBO miniseries further drew attention away from Washington's renewed attention to detail and portrayed the team undergoing an identity crisis.

Mental stability hasn't been this team's forte over the years, but to their credit, they realized a higher commitment to defense would help them overcome the scoring droughts, which have been their undoing in the last two postseasons. Their have been growing pains for Bruce Boudreau's players, but when things have clicked, the wins have been complete team efforts rather than victories attained by simply outscoring the opposition.

It hasn't been as much fun to watch and has led to some uninspired losses, but the Caps' latest road trip displayed what can happen when the defense holds down the fort while the offense scores timely goals. Washington captured five of six points, going 2-0-1 against the Flyers, Islanders and Maple Leafs.

After the week-long stint away from D.C., the Capitals seem to know what they can do with this new system. We won't see as many scoring outbursts, but with a 2.51 goals-against average that is seventh best in the NHL, those outbursts aren't as necessary. 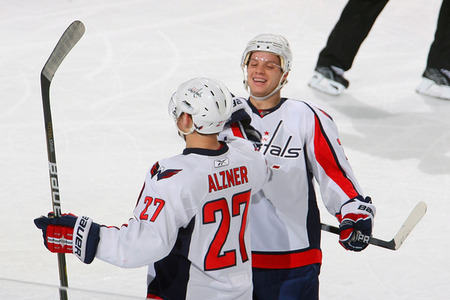 Enough can't be said about the Washington blue line this year. John Carlson and Karl Alzner are drawing praise league-wide for their ability to shut down the top line of almost any team in hockey. They may only be playing in their first full NHL season together, but they look the part of a seasoned pairing, and are a combined +25.

Mike Green has battled inconsistency and injuries, but he is still one of the league leaders when it comes to ice time and is heavily relied upon for both for his puck-moving prowess and his newfound proficiency in the defensive end. His performance this season was deemed all-star worthy, as the 25-year old defender was chosen to play in his first ever all-star game as an alternate captain for Eric Staal's squad.

And the unsung hero this season has to be John Erskine. Erskine isn't blessed with the athleticism of a Green or a Carlson, yet is second on the team with 102 hits, fourth in blocked shots (75) and also has three goals on 36 shots. Erskine is also the heavyweight on the fight card, as he has teamed up with Matt Hendricks to be the enforcers for Washington. 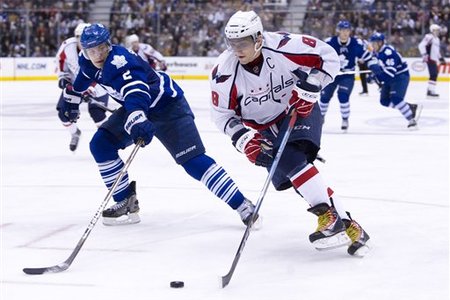 Even though the defense has elevated its game, the special teams are the biggest story, except not in the manner you would expect. The lack of a power play has cut further into the offensive production, while the penalty killing unit has been flawless -- the exact opposite of the norm since Boudreau took the reigns.

The power play struggles have been largely due to the unit's inability to play together as a team. Boudreau himself has said the players on the power play have too often played as a collection of individuals, and the inefficiency with puck possession and movement has been a testament to that. Thus far in January, the Caps are 3-24 with the man advantage, and they haven't scored multiple power-play goals in a game since November 26.

To stimulate the unit, Boudreau has experimented with moving Alex Ovechkin from the point to a wing position, allowing Green and Carlson to man the blue line. Not only is this safer defensively, but it places Ovechkin into a spot where he can pick up a few goals while waiting for his shot to reemerge. If the power play can rediscover the touch which made them the best in the NHL last season, opposing teams best be wary.

The penalty killing unit is the feel good story. Playing a man down hasn't ever been this fun for a Capitals goalie, as they have allowed just 28 power play tallies in the 196 times the team has gone shorthanded. The 85.7-percent penalty kill rate is good for second in the NHL behind only Pittsburgh and they have surrendered one power play goal in 34 chances this January. I believe we call that tightfisted, miserly and downright stingy.

"A lot of it's just a cohesive unit," defenseman Scott Hannan, recently acquired from Colorado, told me. "You can have some great penalty killers out there and if they're not reading together as a unit, it makes for tough reads and then you're going to get caught out of position. I think now we're kind of clicking. Guys are just reading off each other well, the D pairings are working well and when you can do that it leads to good teamwork." 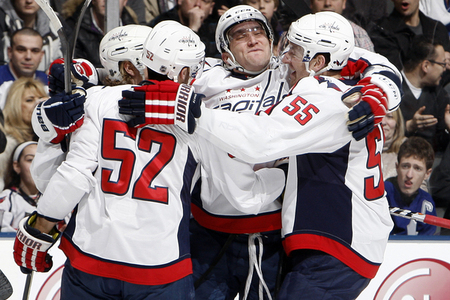 Overall, there's no question the Capitals are a flawed team, but they certainly aren't as inept as some would like you to think. In a season this long, there is usually an ebb and flow, which the Caps have largely escaped since Boudreau has been coach. Fans tend to forget that while Washington blew the doors off everyone in the league last regular season, the Blackhawks went through some rough patches before winning the Stanley Cup and the Flyers barely made the playoffs before winning the Eastern Conference.

The Caps have experienced enormous success over the past few regular seasons, but this year it hasn't been as easy getting through the brutal 82-game grind. Injuries and tougher competition have joined forces to ensure they face a little much-needed midseason adversity, and there's nothing wrong with that.

In fact, what they do with it could shape their playoff fortunes.