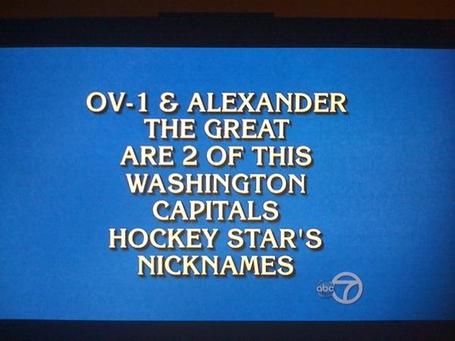 Saturday's Winter Classic brought the Washington Capitals into the national spotlight arguably for the first time since their only Stanley Cup Finals appearance in 1998. Two days later, the Caps have continued to permeate American culture. Tonight on "Jeopardy," Alex Ovechkin was a clue.

A contest chose the category "21st Century Athletes" for $600 and Alex Trebek read the picture above. The contestant would get the answer right and host Alex Trebek would repeat the name "Alexander Ovechkin" in his distinct vocal pattern. If only the contest could get more than $600; Ovechkin could at least spare some of his $124 million contract.

It's nice to see that the Capitals are starting to earn national attention and respect. It is also nice to hear the word "jeopardy" and the Caps in a sentence that doesn't sound like "the Capitals' eight-game losing streak has put Bruce Boudreau's job in jeopardy."