Share All sharing options for: PHOTO: Alex Ovechkin's Colorful Way Of Preparing For The Winter Classic

First of all, let me just say this: HBO's 24/7 series on the Penguins and Capitals was unbelievable. It's right up there with any of HBO's Hard Knocks shows, and that's saying something.

Now that we got that out of the way, let's mention the hatred the two teams have for each other. Obviously, you know that the Penguins refused to shake hands at the end of the Winter Classic game. You also know, if you watched the show, that the Penguins whine a lot. ("F*** you Cookie," said one player to Matt Cooke, for example, who wouldn't shut up throughout the show). Cooke responded later, "F*** you Nicky [Backstrom]. I'll take your teeth out."

But nothing compared to Alex Ovechkin's statement in preparing for the game. I'd show you what he said, but it's explicit, so I can't. All I'll say is that, if you're cool with language, make the jump to see his message. 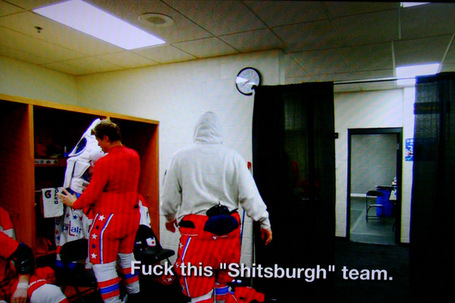